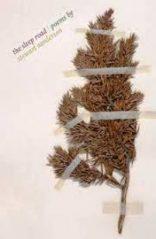 The Sleep Road is the debut collection from Scottish poet Stewart Sanderson. I came across this poet’s work in The Dark Horse several years ago and more recently in his pamphlet, An Offering. It was the combination of formal accomplishment and sensitivity to the rural subject which originally attracted me and this is what Sanderson carries on in The Sleep Road.

Many of the poems are about Scottish landscape. “The Wind’s Poem” begins ‘On Peniel Heugh I abandoned a poem’ and ends ‘between the Scottish borders and the Urals’. “A Lump of Quartz” – one of the early poems in the collection – balances description of local geography and the weird tangibility of historical objects:

Ben Dorain is a Fuji-shaped mountain in the Argyll and Bute part of Scotland. The ‘moraine’ is material left behind by a moving glacier. Sanderson finds unusual rhymes, invigorating traditional end-rhyming metre. He pairs ‘moraine’ with ‘rain’, and later ‘palm’ and ‘Hebridean psalm’. The precise diction locates the poem exactly, exoticising rather than Romanticising Scottish landscape.

In a later poem, “Handaxe”, a similar effect is achieved. The handaxe object is analysed ‘under my desk lamp’s steady light’ in a similar way to the lump of quartz. Old, found objects in The Sleep Road are revealed through physical landscape and the landscape of the poem. The two become forged. In “Hillfort”, for example, the hill is a ‘palimpsest of people’s lives’ and a ‘manuscript / sections of which have not survived.’

The popular term Psychogeography springs to mind when reading this poet’s work. Sanderson is in many ways unearthing a psychology hidden within landscape. He later writes in the fifth stanza of “Hill Fort” that

Sanderson’s poetry suggests that there is a wisdom to ‘reading’ our external environments like literature; the physical act of walking – not just observing – revealing both our own character and that of the land.

As well as historical objects, Sanderson is prompted by unusual and archaic words. One of the pleasures of reading him is coming across names such as ‘Ricagambeda’, ‘Nectovelius’, and words like ‘ohakalind’ and ‘tynsale’. ‘ohakalind’ is the Estonian word for a thistle bird:

“Tynsale” is another early poem in The Sleep Road. It begins with a definition of its title word: ‘the losing (of possessions, etc); loss, destruction, harm, detriment.’ It then opens in rhyming tercets:

I’m reminded here of Gertrude Schnackenberg’s infamous dictionary poem, where she uses the word ‘carnation’ to talk about the relationship with her father. Sanderson is more playful – see how he works ‘tin’ into each of the first three lines. He is also less personal. He does not use ‘I’. Instead, Tynsale is a word that ‘we’re [my italics] losing now / as language thins; a word which could come back.’

Choosing to write in the first person plural grants the poem a communal consciousness. It is a political choice. It allows the poet to air collective grievance. In this case, loss of past rich language, which goes to the heart of The Sleep Road.

Other overtly politically-minded poems in the collection include “The Red Panda” and “The Wealth of Nations”. The first of these shares environmental concerns with other poems (see “Ways to the Wood”), but is more explicit. It grieves – partly with tongue-in-cheek humour – for an endangered animal and the global environmental crisis. It begins wearily:

This is a powerful opening image, and an unusual one for Sanderson. Here is something akin to a metaphysical conceit: the whole world with its shortage of red pandas orbiting the sun. It has an absurd quality which I enjoy, and goes on to ask for our empathy (regarding the red panda):

Keats is a strong influence behind the collection, and here the poet uses negative capability (a type of imaginative empathy) in order to sympathise with the animal. I think we are also being asked to empathise imaginatively with red pandas and the wounded world more generally – it is not sentimental, but an important part of the work. Sanderson asks something of his readers. We aren’t being spoon fed.

“The Wealth of Nations” is another overtly political poem, where Sanderson nods to Adam Smith’s well known classic. The persona states that our economy is ‘achieved’ through ‘any raw material / even anxiety and doubt’. As with the Red Panda’s eco-concerns and grief, this poem ends with another collective worry, sarcastically put:

Quite a number of first poetry collections rely on in-depth poetry reading, but the best quite often give a sense of reading across subjects. History, and the unlearnt lessons of history, are certainly a preoccupation with Sanderson. In “Epistle” the poet ponders how hard it must have been for a woman to ‘earn a living by her pen’ thanks to ‘the insufficiency of men’. Later on, the persona in the poem states ‘forgive me this:

There is whimsy as well as seriousness. The intellectual is mixed with down-to-earth life details.

The Sleep Road ends with “Fishing”, a poem of ease and tranquility. It is completely different from the more politically minded poems or ones which are concerned with etymology. We are treated to a brief 11-line poem ending

“Fishing” is part of The Sleep Road’s great variation of form, mood, and subject matter. I look forward to reading Sanderson’s future work.