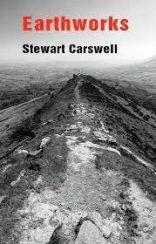 Stewart Carswell’s first pamphlet, Knots and Branches, ends with the line ‘to create a set of stories to navigate by’. It’s taken from a poem called ‘A Map of Stars’—a poem that makes it unchanged from the earlier pamphlet to this, Carswell’s first collection. I mention this as it seems a fitting way to end a book and to set up where he has gone next.

Earthworks has a timeline that feels more akin to the journey of those stars to reach us, starting as it does with the first of several eponymously titled poems. One is subtitled ‘Sutton Hoo, a poem about the famous discovery of a Anglo-Saxon burial ship in 1938—see the Netflix film for an entertaining primer on the subject (and Ralph Fiennes’ Suffolk accent) and a host of books for more details. Please also note the connection of Sutton Hoo and Beowulf, which establishes a deeper poetic lineage for the collection from the get go.

However, the poem only addresses the ship for two of its four stanzas

In the latter half of the poem something shifts. While the questioning format that starts each stanza remains the same, something else is being addressed. Or perhaps someone else. Sutton Hoo has been subsequently discovered to be an early medieval cemetery, and archaeologists worked there for decades uncovering more and more; and it’s possibly this group that the second half addresses. It is, of course, also entirely possible that it is Carswell addressing himself..

When constructing a poetry collection, it’s considered customary to start with one of your strongest poems, and in Knots and Branches the book starts with ‘The Wedding Present’. However, that poem appears in fifteenth place in Earthworks, albeit starting a second section of the book. It’s interesting in the sense that of the handful of poems that made the leap across the intervening years between pamphlet and collection, ‘The Wedding Present’ is the only one of them to have undergone any changes. These changes are subtle, but have a softening effect. In the third stanza, what once read ‘Leaves do not fall far. / Don’t be scared to let in new light’ has become ‘Leaves do not fall far, / so don’t be scared to let in new light.’ It’s less didactic, and lets the stanza flow more by bringing it down from five to three sentences.

Elsewhere, a subtle change is seen in the final stanza. What was ‘[….] Oak is a marker / for home, and marks the starting point.’ in the pamphlet now loses the comma. This again allows the line to flow a little more; the breath no longer needed allows the iambs of the line the chance to settle into their rhythm. To my mind it also takes some of the emphasis away from the oak as a marker. However, that may be labouring the point.

The poem continues with the collection’s themes of taking time, of the ground revealing its gifts and of nature as a source of education. It echoes, slightly, the opening poem with its ‘To return in twilight’. Here the poem states ‘Home should be a place to return to’; but in its final lines it also suggests a need to be ready to leave. ‘Always be within reach of a forest’ could be about where you set yourself up to stay; but it could also encourage readiness to set off exploring. As the saying goes, ‘If you don’t go, you can’t come back.’

‘The Wedding Present’ is a fine poem, and one that partially puts me in mind of Brian Patten’s William in ‘The Irrelevant Song’, especially as it is preceded, towards the end of the first section, by a poem called ‘NB’ that contains the lines ‘[…]. I mark time / by the colour of the leaves / I write on.’ It’s arguable that this poem is also central to the collection, both in the sense that it is quite literally in the middle of the book, but, aside from this obvious point, you sense how the book both points towards it as with ‘NB’, but also how it comes back to it. References to building a nest and to collecting ‘twigs and moss’ are mirrored in ‘Crow’s Nest’, the poem that follows.

Further on, in the final section of the book, we see a nod or call back to home being ‘a place to return to’. ‘At a crossroads in the forest’ (and remember, you should always be within reach of one) closes with the lines ‘Take whichever path you want: / they all loop back here.’

I hadn’t expected to dig so deeply into ‘The Wedding Present’, but it does appear to be the gift that keeps on giving. But we must move on from it—there are plenty of other poems in the book to consider.

Each of the collection’s three sections considers both the impact of the land on us as humans and also our impact on the land. In ‘The Wye, Belmont Woods’ – the poem takes its title from a painting by Brian Hatton – the opening line is

Nature is in control, nature has a plan that we are unaware of or can’t fully fit in with, but the poem ends with the protagonist looking out at what I assume is a lake, pond or river.

The introduction of the gun barrel is jarring as a reminder of the sorts of things mankind brings to the party in terms of co-existence with this planet and the places we live in. But there is hope, in the final lines of this poem, of a return to drawing on the landscape and the world we inhabit on order to make sense of what is important. These lines are given added weight and importance in light of the last lines of the whole collection. In the final ‘Earthworks’ poem, subtitled ‘Offa’s Dyke, Tidenham Close’ we hear about the titular Offa’s Dyke, the earth bank and ditch that runs between England and Wales, delineating a sort of border. The poem talks of ‘its thousand year-old ambition / beneath the needless ditch and dyke.’ The question of what is the point of such a border arises, but the poem’s real gut punch comes in the final lines.

For all the petty borders we may build and war ships we may sail across this planet, we get one go at it.

When I set out to read this collection I wasn’t thinking of it as an instructional manual; I was thinking I might be reminded – or even learn something more – about historical events I was taught at school (and have largely ignored since). However, in Earthworks Stewart Carswell has woven that history together with enough of the personal and the political to make a deeper impact. To return to where we came in with ‘A map of stars’, he’s been