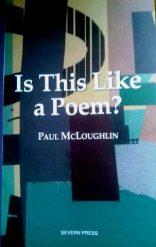 Poetry review – IS THIS LIKE A POEM?: John Forth is reminded of Paul McLoughlin’s distinctive voice while reading this collection of posthumously published poems

The dates of Paul McLoughlin’s main publications reveal an apparent gap between 2007 and 2017. So it is this period that is strongly represented in two posthumous ‘unpublished’ volumes resulting from a major trawl of out-takes in 2019. Half appeared in Whatever Else You Might Say (recently reviewed for London Grip by Mike Bartholomew-Biggs) leaving half, similarly in alphabetical order, for Is This Like A Poem? Many earlier poems also earn their place in this second selection. For one thing, a bushel can disguise the brightness of a light, and for another Paul had written more than most beginners when he began.

The book opens with a prose preface from 2011 detailing aspects of his secondary education at a Roman Catholic Grammar School, and is then divided into ‘shorts’ and longer poems. A lot of the preface content has been mined for other volumes, but it’s also a lead-in to poems in the current selection. The alphabetical arrangement by title means that it is ‘book-ended’ by ‘Absent Server’ and ‘What Certainty is Like’, the latter being the title poem for his first chapbook (Smith-Doorstop, 1997) which was a winner in the pamphlet competition for that year. In the final cut, the book went to print without it. An abstraction is immediately grounded at the start:

It’s an early poem so why does it look like a late one? Probably because, although it’s a throwback to teenage years (‘Don’t tell Mum or Dad the bump on your head’s / some nutter not a door…’) it nevertheless artfully tackles the concerns, even terrors, of a more mature mind:

A battle against ‘certainties’ was one he was always stuck with, whether in school or ‘life’ or in the poetry ‘village’ – all of which have a long reach. One of his remedies was to hide:

The opening poem, ‘Absent Server’, is another childhood memory but one in which he briefly comes out of hiding when he recalls an experience as an altar boy substitute:

This one never quite made it either (like his beloved Brentford supposedly, at least not until May, 2021 – a month too late). It had always been visible but never quite surfaced, unlike the Surtsey of its main image. A ‘short’ he always intended to return to, its compression made it unalterable. Maybe the displaced ‘I’ threw us off the scent temporarily? And the altar boy still in bed is not the ‘I’, which is obvious until it’s pointed out perhaps, when it becomes easy to see why a reader might trip up. The questions at the end seem unreal before fading into another questioning – whether the power of memory itself is enough to justify awe, or in this case a poem.

Being a teacher in the modern school context, the speaker in ‘Adult Stuff’ perceptively outlines the silence of fear raised by trivial ill-informed ofsted inspectors – finding hope in a younger generation who have better solutions to such nonsense. ‘Success Criteria’ airs a favourite gripe to underline the difference between teaching T. S. Eliot and making a shepherds’ pie. After a smack at SMART targets recommended for lessons, even English lessons, he tells his students that although in cooking they may arrive ignorant and leave knowing:

As if to confirm the statement that no one simply learns only what we tell them (as per ‘targets’) the irony and wit of the young become foregrounded to end the poem:

Paul believed that the angels never win against Education’s ‘certainties’ because those responsible for the latter are struggling to understand what it is they’re certain about. Consequently, he’d point out to as many students as possible the idiocy that was taking over their lives. The title poem is three ‘shorts’ called ‘Is This Like a Poem?’ which targets various despairs more generally:

Often he was only raising a point so it could be shot at, but not always:

Eventually, as in Rome, whatever deserves to last is likely to return anyway:

In ‘Colosseum’ the eye follows a modern cat loping about the ruins as if at the tail end of a football match. In fact, the whole four-part sequence ‘Bread & Circuses’ surely would have made it into a main collection if there had been one at the time, and that’s true of quite a few of these poems. ‘A Game of Three Halves’ – an early attempt at football writing – deserves a mention. The first, called ‘Watering Hole’, is a family history of Brentford FC; the second ‘Just as Well I Suppose’ says what supporting a local lower league team is like (‘learning / to be pleased but not excited…’) and finally a respectable footballing ‘Four Quartets’ pastiche looks like a case of ‘the portentous understated’ (if that doesn’t sound too portentous). It was the first McLoughlin poem I saw and it was almost certainly among his earliest:

The search project of 2019 enabled the bringing-together of many such pairings and short sequences that would have been impossible in the chronological collections. ‘Gone’ and ‘Done’, two short poems in ‘Whatever Else You Might Say’, begin with son Thomas in a high chair forty years ago and end with Thomas and Sarah’s high-chaired daughter, Niamh. The first comes trailing Catholic undertones often alluded to in earlier poems: ‘your palms pushed out before you like the Pope’, and the conclusion counterpoints the loss of a father with the birth of a son. The later poem for Niamh begins in a kind of echo-chamber and goes on to refer to the great tidying, and the ways it, or we, might be considered ‘done’. Childlike activity is certainly echoed in what the adults have been doing, and a glance at the distinction between ‘done’ and the pain of parting is tinged with loss, even if a number of good poems had been recovered in the purge:

In the new collection there is a similar bringing together in ‘Sally’ (another early effort) and the later ‘Malcesine’ (one of the ‘shorts’). In the early poem a tale of innocent mismatch ends with the young girl’s riding off with one he calls ‘Brutal Bike’, who then turns up as the cabbie to ferry a frazzled now-married speaker to the maternity unit. He learns that Sally…

Leave aside the typical ‘talk about something else’ during their journey, there’s an echo of the Larkinesque in the sad acceptance of being what we always were. It’s there again in ‘Malcesine’ when two old work-mates meet at an airport. ‘Perhaps’, the speaker says,

I’m struck by the contrast of compression and slow unravelling in these poems, but what’s most interesting is the fact that both types appeared early on and both are featured later. Brian Jones (whose ‘Selected’ Paul edited) was maybe an influence in saying we were always going to end up where we are, but such points of rest are at the heart of most McLoughlin poems, together with a unique sense of bewilderment that is sustained throughout his work.