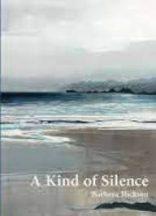 Barbara Hickson’s first pamphlet, A Kind of Silence, reveals a profound understanding of the natural environment. Her poems express this in an engaging poetical language that develops her thoughts and feelings in fresh and original images and well-controlled lines. Hickson lets nature speak; she prefers to listen to ‘this almost-silence / this inbreath / this outbreath’ that characterises her surroundings:

There is a sense of suspension, a momentary stillness when all sounds stop and there is a quasi-religious silence. Everything seems washed, renewed and unspoilt. The poet blends in with this reality as she wanders through grasslands, shores and forests. Her feelings are in unison with trees, rocks, water and the animals she encounters. Nature seems to have a spirit of its own that Hickson absorbs, reviving its essence through her perceptions:

It is a mysterious world; its sounds and meanings are voiced through the poet’s verses and tell us what they know – and sometimes also tell us what ‘we didn’t want to know.’ The point of view remains open to new discoveries, providing answers to undefined questions that may seem important at first but are eventually ‘weightless’.

‘You are not lost’ is the conclusion to the poem ‘In the Forest’; our failures and imperfections and our striding through difficulties ‘vanish like birds into trees’. Thus, the deep contact with nature has the potential to purify and to transform the self, ‘re-defining home.’ This open attitude not only allows the merging with and understanding of nature but also brings a metamorphosis of sorts that gives peace and balance:

This is a meditation in which frailty and loss are temporarily balanced by an acknowledgement and acceptance of our vulnerability, ‘where nothing remains the same / yet nothing changes / […] where your name is written on the shore,/ each letter shaped by the wind,/ each hollow replenished/by the returning tide.’ We are present and yet effaced in our human condition that is mortal but also part of the cycle of nature and therefore eternal.

Stones symbolise difficulties or anxieties the protagonist encounters in her exploration; in due course, however, the ‘pockets of stones’ are finally emptied; she lets them go, tipping out ‘the grit that rubbed me raw’ in an accepting open attitude. The cold stone she is holding now feels warm to her. What was missing or uncertain is eventually accepted for what it is and is changed into something positive.

The poems explore the significance of the relationship between human beings and nature, emphasising an understanding of the environment into which the protagonist merges. The experience is crucial and absorbing, revealing the development of the self in harmony with nature. The acceptance of difficulties and flaws allows an openness to further discoveries that the protagonist embraces in her closing lines.

Crazy: The Madness of Contemporary Art. Review by Carla Scarano. Diamonds of the Night (1964) / The Party and The Guests (1966) directed by Jan Nemec – Second Run Blu Ray. Review by Alan Price.