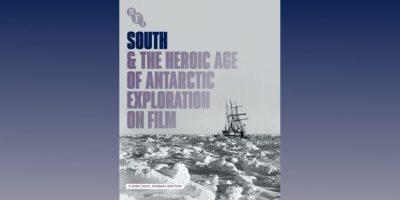 In South’s perceptive booklet Byrony Dixon informs us that this is the first attempt to bring all the Antarctic films of the Heroic Age together in one set.  She capitalises the term Heroic Age, as if to keep a distinct difference and distance from the morally ambivalent age of empire and includes a quote from JFK wanting to have men on the moon before the end of the 1960’s.  Heroic endeavour rolls on into the late 20th century with the moon landings.

In the documentary extras Neil Brand (the composer of a new music score for Frank Hurley’s South) talks of the heroism of Edward Shackleton and his crew.  You can perceive it as foolish and reckless or a triumph for the human spirit.  Brand feels both descriptions to be valid and, as I also do, that the Antarctic team were imbued with a nobility of purpose or noblimente – an expression frequently used in the music of Edward Elgar.

I think “heroism” is an important attribute to highlight whilst watching these fascinating films.  The Antarctic was the last and largest land mass on our planet to be explored.  All that effort, given such harsh conditions, resources and equipment, compared to modern scientific exploration is extraordinary (contrast the rudimentary basics of the Antarctic expeditions of 1897 – 1922 with say the sophisticated technology of Werner Herzog’s 2009 documentary Encounters at the End of the World.).

Hurley’s South (1919) is the film account of The Imperial Trans – Antarctic Expedition, 1914 – 1917.  It’s done in a lecture format that combines film, music, slides, maps and title commentary.  There are some thrilling tracking shots, from the side of the boat, revealing enormous icebergs – one we learn is 100 feet high and 32 miles long.  Their ship Endurance gets trapped in heavy pack ice.  One amazing shot of the ship is of it ramming the ice pack – a technical miracle of filmmaking.

Yet their more humble moments, when the dogs are being fed on the ship, and later on the crew playing football on the ice, also prove to be emotionally engaging and touching.  There are of course lots of shots of animals; not just dogs onboard but the native penguins and seals.  They take up about 20 minutes (If you think that’s an inordinate amount of screen time, or desire even more, then you’ll find further animal life on South’s extras).

Accompanying South are four other expedition films.  Fram (1910-1912) is the next stand-out film to equal the power of South.  Although only 22 mins compared to South’s 81, it’s just as technically accomplished.  Fram – Roald Amundsen’s South Pole Expedition, 1910-1912 exists in several re-edited versions and also has scenes in colour and blue tinting.

The most well known moment is the humorous silent encounter between engineer Kurt Sundbeck and a penguin.  There is something absurdly balletic about their interaction that had me wondering if Keaton or Chaplin had seen this scene and learnt a trick or two.  Like South the film has been beautifully restored.  And unlike Hurley’s documentary Fran contains fewer animal shots – its Greenland dogs looking so loyal and handsome.

We also have Nobu Shirase’s The Japanese expedition to Antarctica (1910 -1912) and Home of the Blizzard (Frank Hurley again).  The first being only a portion of the complete film which will be screened later in 2022’s Cinema Lost and Found event in Japan.  And the latter Blizzard is considered to be Australia’s oldest surviving feature, again much remarkable footage yet for me not quite on par with the eloquent testimony of South.

If you already possess a copy of the BFI’s The Great White Silence (the record of Captain Scott’s journey to the South Pole) then you will want to acquire the South set.  Or even if you’ve only ever watched John Mills in Scott of the Antarctic you need to see the real-life Heroic pioneers doing the real dangerous thing.