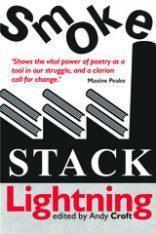 Smokestack is a small press which ‘aims to keep open a space for what is left of the English radical poetic tradition in the twenty-first century’, and ‘champions poets who are unfashionable, radical, left-field and working a long way from the metropolitan centres of cultural authority’. This is their two hundredth book and includes 199 poems, all taken from earlier collections, many in translation. There are some very famous names here – Brecht, Heine, Mayakovsky, Victor Jara, surprisingly Sylvia Pankhurst (on getting a jail sentence). I was happy to see that John Gohorry, who died last year, is represented by a splendid poem, ‘On Others’ Shoes’.

There are poems about the Holocaust and about Palestine. There are poems written in the Soviet Union during the war – Konstantin Simonov’s celebrated ‘Wait for me’, and Alexandr Tvardovsky’s ‘On the Highway to Berlin’. Goran Simic, who lived through the siege of Sarajevo, describes ‘What I Saw’. Chawki Abdelamir, on whom I can find no information, writes a devastating poem, translated by Alan Dent, about what fire has done ‘In Baghdad’s National Library’. Other non-English language poems come from Cuba, Algeria, France and Greece. The furthest removed in time is Isabella Morra, who lived in the sixteenth century and was murdered in an honour killing. Her poetry was brought back into the mainstream quite recently and her ‘I write weeping about the fierce assaults’ is translated by Caroline Maldonado.

Of course, some poems are considerably better than others, but still, it’s hard to choose a favourite and I won’t try. Michael Rosen is as always a delight to read. Fans of Martin Rowson will enjoy his literary limericks. And I especially liked John Lucas’s ‘The Blame’, about British snobbery, and Jeremy Robson’s ‘The Heartless Traffic’, about refusing to listen to the news. ‘If only we could press the pause button’, he meditates, ‘in real life’. Ruth Valentine’s ‘The Undertaker’s Song’ is a powerful lament for all the victims whose names we don’t know:

And I liked very much indeed Emma Jones’ ‘In Retrospect’. She points out, what I have often noticed, that we are all now very enlightened about Magna Carta, or slavery, or the battle for the suffrage, but when it comes to dissenting movements in our own time: