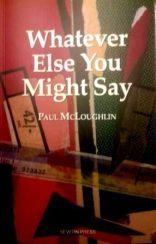 Poetry review – WHATEVER ELSE YOU MIGHT SAY: Michael Bartholomew-Biggs savours one more collection from the late Paul McLoughlin

Paul McLoughlin has always been a poet with an observant eye – and that eye has often had a twinkle in it. It must have been the schoolteacher in him who noticed

It would have been the musician in him that spotted the ‘bomber-jacket bassoonist’ who ‘quicksteps through the flood / as if he’s often late.’

One wonders what aspect of a fleeting observation led McLoughlin to make this Sherlock Homes-like deduction about the bassoonist’s habits of punctuality. There are in fact several occasions when his remarks and inferences become so enigmatic as to be obscure. In “Black Velvet”, an atmospheric sketch in which a woman seems to be mocked or patronised by a group of men at a party, why is the pay-off line ‘Her husband’s name was Norman’? Why is a perceptive poem about teenage loss of religious faith entitled “Caterpillar”? One could imagine these questions being addressed in one of McLoughlin’s gruff-voiced introductions at a reading: but sadly this will not happen because the collection is a posthumous one. It is drawn from an extensive backlog of work that the author began organising and revising in 2019. This volume had been assembled before the Covid pandemic occurred; but McLoughlin’s sudden death in April 2021 meant that he never had the chance to present it to an audience.

So we simply have these poems on the page to extend McLoughlin’s impressive list of previous publications. They have been drawn from work written overa period of more than twenty years and reflect McLoughlin’s extensive travels, his enthusiasm for many kinds of sport and his love of jazz. His own second career as a semi-pro musician entitles him to recycle the old joke about a man who turns up at a jazz club with a suspicious looking case and, when challenged, says it’s full of explosives.

He sometimes writes about frustrations encountered during his long career as a teacher. “Dreaming of OFSTED” relates a nightmare in which ‘[you] find yourself teaching in the car park / to the wrong kids’ after which the school inspectors report ‘there were some quite nice touches but / the grade was visibly the lowest you could get.’ Elsewhere the poet is fully awake when he voices his scepticism about the tick-box culture applied to learning and assessment: ‘the beauty of it is / whatever I do is checkable against a plan.’ Better yet he never needs to worry about failing at his job: ‘I know I’ve succeeded / because I’ve done what I’ve done’

Although I would class him as chiefly an urban poet, McLoughlin is aware of the natural world and writes about it well; but in the middle of an eloquent description of French countryside with nesting magpies he cannot resist inserting a schoolboy pun In Franglais

Sometimes, as in “Ruddy Ducks”, wild-life behaviour serves mainly as a metaphor for some element in the human condition.

For most of the time he stays within the radius of the persona; but occasionally takes a sidelong look at world affairs, for instance wishing for ‘a sense-of-humour pill for politicians / who insist on using words like history’. A background detail in another poem is the loud bar-room TV which broadcasts

References like this might benefit from the poems being dated. There is no difficulty however in dating the poem “Millennial Air” with its mention of ‘New Labour’s Dome’ and scorn for reliance on commercial backing echoing through the repeated refrain ‘Culture fills a sponsor’s bap and does good deeds.’ This poem also expresses concerns about the world of contemporary poetry when it mentions a publisher (OUP perhaps) ‘dumping modern verse’ and regrets the day when ‘pollsters choose a laureate’.

Elsewhere there are further glimpses of McLoughlin’s strongly held views about poetry. (In real-life conversations he made no secret of his opinions about which current books were unreadable and over-rated.) We get a gentle hint of this in “The Footballer’s Tense” when he comes across a pamphlet in a bookshop and considers that there can be no harm in ‘checking out the opposition / especially someone likely to be readable at least.’

McLoughlin’s own poems are all carefully crafted and “orthodox” in the sense that they use regular stanza structures and conventional syntax to contain his inventive ideas, engaging imagery and adroit word choices. He sometimes uses standard forms like the sonnet and sestina (and in the latter he meets my personal requirement that the end words do not make themselves too obtrusive). He quite often employs rhyme and does so very skilfully. “Elegy for an Adopted Aunt” uses a form I haven’t seen before and which McLoughlin may have invented. It features four-line stanzas with the same rhyme throughout in lines two and four, as in

This poem also shows a tender side of McLoughlin’s writing which can sometimes be missed by those who chiefly remember his dry wit and irony. Another example is the patience and understanding he shows for the emotional tangles of childhood. “Picking up Fairy Cakes from Gran’s” must surely recall a real experience when ‘he didn’t want to … but it wasn’t worth the hassle of saying no’ because

A less public teenage conflict is captured in “Caterpillar”, mentioned earlier, where a teenager’s drift away from childhood Christian faith reaches a point of ‘ not believing in Him, knowing / He was there.’ There is a gently humorous tenderness for the later stages of life too, as in “When I’m 64” (which interestingly appears on page 63) which is an affectionate checklist for his wife against predictions made in the Beatles song from the 1960s.

This is a highly enjoyable and varied collection that should find a place on many shelves beside McLoughlin’s previous books. The pity is that we will not be able to hear him perform the artfully rambling account of the virtues of the reel-to-reel tape recorder he had to fetch from a repair shop in Bexhill (“Another Thing”) or listen to the accumulated hypothetical holiday calamities listed in “Imagine”. We shall all have to do the best we can to imagine a suitable rendering of the words he has left for us on the page.