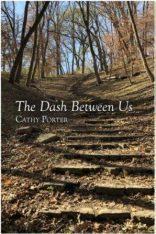 Poetry review – THE DASH BETWEEN US: Charles Rammelkamp peruses Cathy Porter’s poems which try to pin down time that is so easily lost or wasted

Cathy Porter laments in “Behind the Shades”:

The characters that populate The Dash Between Us are all victims of time in one way or another. For instance, take “Ten Minutes In.” The clock is ticking. The narrator is standing in line at a coffee shop. The man who has cut in front of her apologizes and tells her his name. He limps from war wounds sustained in Iraq.

Or take the woman who works the graveyard shift at a convenience store, in “Holly, Who Works Overnights at the Kwik Shop”: “she’s robbed – twice – between midnight and 5am.” It’s a grim life, but she’s got a child to raise,” and “she just wants to get home / see her son before school.” It’s a trade-off; either way, she’s squandering time, her life leaking away.

“No Sugar Tonight” features a lonely woman in a bar, desperate for company.

The man she’s talking to (boring to tears is more like it) sneaks away, escapes from the loser who is talking his arm off, maybe to hide in the bathroom, “or headed / home to his wife, dog, 10 cats.” Another wasted night, but what’s she got on her hands but time?

The title of the poem, “65 Cents,” may as well be code for “chump change,” another poem about squandered lives, frittered away like loose coins. A couple wakes up hammered by hangovers, “one cigarette left / we’ll fight over later.” There’s 65 cents on the table, but it’s “the dash between us” that’s the real story, the tenuous, violent connection.

“There Goes My Hero” is another heartbreaking poem about a guy named Eddie whose life has been shattered by war, though he’s celebrated as a hero when he returns to his hometown.

What the town doesn’t know about are the “night-time panic attacks – the bombs that / go off in his brain. The endless shakes.” They slap him on the back, atta-boy style; “bet you took out a bunch of ’em, huh?”

“Will Brown, 1919” is a poem about a lynching. “Vonnie, the Waffle House Waitress” smiles through the indignities and absurdities that litter her life like the loud drunks singing along to jukebox music. Time weighs here, too. But it tips the scales only if you let it.

The collection begins with “Breonna” and ends with “My Name Is Equality,” a poem that alludes to George Floyd but signifies so much more. My name is equality, “And I have been forgotten.” It ends, “I can’t breathe. We can’t breathe. / A knee on the neck: 8:46.” Two more people whose time has tragically been cut short.

The quiet desperation with which the people in Porter’s poems lead their lives makes time an anvil, weighing them down. At the same time, paradoxically, it’s elusive, feather-light, slipping through their fingers until it’s gone, almost unnoticed.