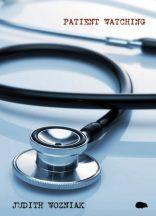 Judith Wozniak’s debut pamphlet Patient Watching is an empathic and moving evocation of the life and work of a doctor in general practice. The title is instructive – not only does the doctor watch the patient, but they do so with great patience and empathy. Wozniak spent her working life as a doctor. She is a past winner of the Hippocrates Prize, and this pamphlet won the Hedgehog Press Pamphlet Competition. It serves as a profound testament to her skill as both a doctor and a poet.

The first section is inspired by John Berger’s seminal work, A Fortunate Man. His book, published in 1967, charts the work of a Gloucestershire G.P. in words and photographs. It paints a moving picture of the professional life of a rural doctor and of a way of practising medicine, embedded in the community, that has largely disappeared. Wozniak takes this work and refashions it in her own words. But she has done more: she has created a sequence of poems – a heroic crown – as a tribute to both the man and the profession. (Just as a reminder – a heroic crown is sequence of fourteen sonnets, where the last line of the first sonnet becomes the first line of the second, and so on, and the fifteenth sonnet is comprised of the last lines of the preceding fourteen, all in the same order.) This is, in itself, a technical feat of considerable ingenuity, and it is greatly to Wozniak’s credit that the sequence feels almost seamless and that the technical skill never intrudes into the individual sonnets and their sensitivity to their subject matter.

Berger described himself as ‘a storyteller’ and emphasized the importance of truly ‘seeing’ rather than merely ‘looking’. Wozniak is a worthy inheritor of that legacy – her work is a treasure trove of small descriptive details that bring her characters to life and create a sense of both the individual and the community in which they live. For example, in talking about a miscarriage –

Or, in sensing a potential disability in a new-born child –

Within the confines of the sonnet form there is considerable variety – there are couplets, tercets, sonnets with a conventional ‘turn’ and some with a final couplet. And despite covering an array of medical conditions – pregnancy, birth, mental health, ageing and death, to name only a few – Wozniak’s language is never medicalised. Rather, her use of language is deceptively simple and economical, often with a beguiling choice of descriptive words; for example, ‘nested in his mother’s lap’; ‘knitting her hands’; ‘tumble of worries’; ‘a puzzle of back-streets’. With the use of such finely observed detail people spring to life on the page –

There is never a doubt about her empathy, yet the writing never errs towards the sentimental –

The same quality of compassion is evident in the second part of this pamphlet, where Wozniak draws more explicitly on her own experience of general practice, where the need to watch, listen and wait can be paramount. The first poem in this section, ‘Pattern Recognition’, is a blending of the experience of a trainee doctor together with an unspecified earlier event of loss. There is a poem with a painfully detailed description of a child whom no-one else notices; another shows the sensitivity required to address domestic violence. Yet another reveals the consequences of stretched mental health services –

The final poem, ‘Holding a Stranger’, powerfully portrays the devastating responsibility of holding someone’s life literally in one’s hands, again with the echo of an earlier personal loss, the better for being hinted at, rather than explained.

This is a collection of poems handled with a sure-footed deftness and delicacy. Wozniak honours her subject matter and her subjects equally. As Tamar Yoseloff has written in her introduction, ‘the power of her work is to show us ourselves at our most vulnerable, but to find in those moments something redemptive and hopeful’.

Diana Cant is a poet and child psychotherapist whose two pamphlets are Student Bodies, 1968, (Clayhanger Press, 2020) and At Risk – the lives some children live, (Dempsey and Windle, 2021)