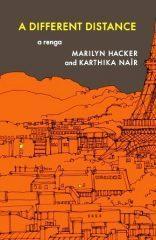 A DIFFERENT DISTANCE: Norbert Hirschhorn listens in to an email conversation between the poets Marilyn Hacker & Karthika Naïr which has been crafted into the form of a renga

Two women poets, friends and expatriates, are locked down in Paris for much of the Covid-19 pandemic in its first devastating year. One, Naïr, has breast cancer and is under severe treatment; the other, Hacker, has a series of stress-induced illnesses and injuries. They decide to take solace by creating a renga via email exchanges to describe their lives and determine how to carry on despite everything.

Some definitions: The renga is a genre of Japanese collaborative poetry (the word meaning ‘linked verse’) built from a succession of tankas, the two-stanza five-line poems made up of 5-7-5 / 7-7 sound units (Japanese) or syllabic units (English). (The first stanza, the hokku when split off as a separate genre became known as the familiar haiku.) Two or more tankas form the chained poem known as the renga where each last line of a tanka supplies a word or image to be echoed in the first line of the next tanka, often in surprising ways. The composition of a renga typically engages two or many poets writing and reciting in turn.

In Japan composing a renga is an eminently social, even competitive event, one displaying each poet’s skill. An image comes to mind of poets gathered around a lantern with plenty of saki to liberate the tongue, continuously linking verses until everyone falls asleep.

Hacker and Naïr, on the other hand, both suffered insomnia. They met but once face-to-face during the year due to contingencies of illnesses and the pandemic, but stayed in touch through the intermediary of the internet almost daily over twelve months, from March 2020 to March 2021. In the book, Naïr’s tankas are on the verso page, in pink, Hacker’s on the recto page, in black.

In the course of the exchanges, in the plague year of Paris, the poets reveal their anxieties, longings for semblances of normality: shopping at outdoor markets, meeting friends at cafés, exploring bookshops, strolling through gardens and along canals. Both had to leave home from time to time — scurrying is the word that comes to mind — searching for vaccinations, food, and medical care. (Naïr had many brave friends, whom she thanks profusely in the acknowledgments, who escorted her to appointments.) Hacker is angry that many young Parisians seem to be careless about the disease: ‘Again infantilized, should/ I be locked up so // the young can go about their/ business, getting and spending?’

The exchanges were not strictly epistolatory in that neither poet commented on the preceding poet’s narrative. The verses in parallel, however, show both facing ‘ordinary’ threats to life while a pandemic rages. A different distance, indeed.

The renga is managed perfectly. Many of the poems are lyrically beautiful even while reciting quotidian moments: Here is Naïr’s 12 December 2020 entry:

Here is Hacker’s 10 April 2020 lament on the virus-imposed isolation:

Their own concerns notwithstanding, both poets are bitterly aware of the tragedies taking place elsewhere. Naïr writes of a railway station in her native home of Kerala where,

Brava to both brave poets.