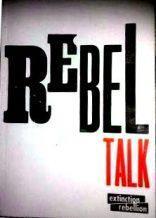 These poems emerged just as the Pandemic struck. Like a thunderclap.

Responding to Rip Bulkeley’s call, sixty-three poets contributed to Rebel Talk and BA (Hons) Graphic Design students at Oxford Brookes University designed and illustrated their work, in stark colours: black for rebellion and red for talk. As Philip Gross’s Foreword to Rebel Talk explains, their poems “…seek to show what, uniquely, these times are, and why it is once again so urgent that creative artists respond to the challenges they pose, in particular to the climate emergency.” Each poem is an individual response to this challenge: as a collection, they possess a wealth of language and imagery, by turns hard, laconic, diamond sharp, down-to-earth, tender, urgently lyrical. What are these times? Almost – not quite – too late. Cathy Dreyer in her poem, ‘How I Mistook the World for a Cow’, skewers our fantastic, fatal, credulity: “It’s true. I thought the world was a large cow. / I used to drain her bulgy dugs most days.”

Rebel Talk is divided into six chapters, exploring themes and emotions which draw together our responses to the climate emergency. The opening chapter, ‘Earth’, rejoices and grounds itself in nature’s diversity and cosmic unity. Here is a vision of a natural world which we can recognise and respect, in which we can flourish and thrive because we know what we must do to make sure we don’t damage it. This is the world we are losing. In her poem, ‘Song of Praise’, Shanta Acharya conjures up this vulnerable cosmos in prophetic language: “Praise the stars in their constellations / for knowing their place, yet blessing all migrations… “ She then shows a cornucopia of plants with their gifts “… sun-facing, light-changing, /breathing in carbon, green deities in meditation, / giving us oxygen, expecting nothing in return” and finally, the dazzling variety of species they sustain “rich, rare, wild, keepers of infinite secrets.”

The next chapter, ’Loss’, sees this is all at risk. The poems are dystopian, a vision of our disrespect for the Earth, which shows humanity struggling to understand the consequences of our behaviour on our fragile planet. There is a climate change emergency. Yet we often fail to see the symptoms of the planet’s sickness, hiding in plain sight. They reflect the many injustices inherent in our social and economic structures. In her poem ‘Cassandra’, Kathleen McPhilemy perfectly captures how this catastrophe reveals itself just beneath the surface of everyday life, to two young parents with their child: “Such a beautiful spring they hardly notice/cuckoos are absent, bats do not fly… “ as well as how we sometimes do not wish to hear about what is before our eyes: “She sits beside them, marking all this /files it along with other horrors/she knows they’d rather she didn’t talk about…”

In her poem ‘drought’, Elisabeth Sofia Schlief charts the breakdown of our relations with other species and with our respect for the Earth’s resources, so we are now confronted with the desiccation of our future:

We are not the only species to register stress – and others are beginning to turn on us: “Don’t go out alone. Only move in cars. / Bears are forming street gangs.” (‘Natural Neighbours’ – Emma Lee). Everywhere, what we once relied upon is receding. We must summon nature back, as Jules Whiting does in relation to soon-to-be vanished grass in her poem ‘Green Man’: “He loves the scent//of damp greenness, /sinking into the ground…” But it is late, as Caroline Jackson-Houlston shows in her poem ‘Great Northern Diver’ (or Common Loon), a species which is on the RSPB Amber list:

(The Great Auk became extinct in the mid nineteenth century).

The poems in the next chapter, ‘Fear’, imagine the effects of loss on our confidence, as environmental degradation strips away our ability to rely on natural forces and the riches we have taken for granted. Rachel Burns shows this in her poem ‘Starfish’:

In his poem ‘Winter Visions’, Paul Sohar explores the intuition that we might learn from other species:

Then there is the fourth chapter, ‘Guilt’. Who is responsible for this folly? Surely all of us, should we fail to act. Whatever happens, the poems say we must bear witness. Exactly as Sarah Bryson does in her poem ‘Beachcomber’:

Susan Taylor in her poem ‘Exchange with an Oak’, focuses on our brinkmanship in our dealings with nature

The poems in the penultimate chapter, ‘Struggle’ call us to action. They show us authorities we should resist: adults – from the viewpoint of children who will inherit the consequences of their neglect and selfishness; landowners who fail their environmental responsibilities; consumers who chose to ignore the emergency. What can we do? We can protest! As usual it is hard to beat the clear-sightedness of children, or their grasp of justice as expressed in Aaron Lomas’ poem ‘Youth Strike’ (Aaron was six years old when he wrote this!)

In her poem ‘Glyphosate’, Sarah Watkinson, addresses an absentee landlord, observes his rapacity as his crop treatments land where they are not wanted: “Airborne poison uncontained / drifts beyond your acreage / and what you take’s not yours to spend / but common ground along the edge.”

The poems in the last chapter, ‘Hope’, encourage us to believe catastrophe is not inevitable. We must never give up, even though things are hardly going well out there:

We must never give up hope:

Rebel Talk makes the case that our response is crucial now. We may continue with our busy lives: ignore the emergency and take the consequences – or hope they never arrive. Or we may talk, listen, persuade, organise, raise awareness, act. Rebel. Like other species, we have noticed something is wrong. Our rebellion must be an uprising against callousness, greed, and injustice.

These are poems to read, reread, and act upon.