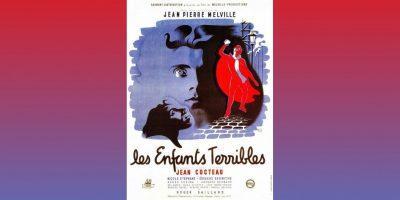 When critics write of Les Enfants Terrible, Jean-Pierre Melville’s superlative film of Jean Cocteau’s novel, they use terms like “sibling rivalry” and “an obsessive incestuous relationship.’  This is true to a rational degree only.  A teenage brother and sister, Paul and Elizabeth, share a claustrophobic room space; private games and battles of love and hate are fought between separate beds in their dead mother’s flat and then the gallery area of an inherited chateau.

Voluntarily confined in cluttered rooms with drawers of useless junk, that Cocteau’s voice-over informs us have symbolic value, Elizabeth (Nicole Stephane) appears to dominate, with a fierce intensity, the more vulnerable Paul (Edouard Dermit) of romanticised stubbornness and a weak heart condition.  Yet their locked complicity conceals a frustrating and cumbersome desperation.  We are made to pity, rather than condemn each emotional outburst, as they fight, not just each other, but the child / adult rites of passage.  But they are never physically incestuous.  Even the scene when they argue over who should have a bath first is hardly shown and we hear them shouting and splashing in a selfish infantile manner.  Cocteau says of the noisy siblings that they are “like two halves of one body.”  Yes, verbally tormenting one another with their mind games.

Brother and sister are trapped in a private game whose outcome isn’t to be the relief of anticipated maturity.  In their drama of hurled death-wishes the climax will be tragically death itself.  Scene upon scene, eventually in a room designed with theatrical screens, is heightened to the point of hysteria.  Melville’s direction is extraordinary for harmonising a grounding realism with Cocteau’s heightened poetic language.  You begin to view this as a duel between Thanatos and Eros.  Yet any mythological link is back grounded (Unlike Cocteau’s films Ophee and La Belle et la Bette.)  What we experience are two children stuck on the painful axis of whether to grow up or not and though their kind doctor and maid cannot change them they retain a great affection for these “Holy terrors” (The American title of the 1929 novel).

The new Blu Ray edition has received a 4k restoration that reveals a mastery of black and white imagery from Decae.  In the scene, on the train at night, we see brother and sister travelling to the seaside for a holiday after the death of their mother.  Outside it’s raining and Elizabeth is wiping the window so as to see out.  “All fire and ice, she despised anything lukewarm.  She was a thoroughbred and wanted Paul to be too.” intones Cocteau.  There’s a cut to brother and sister lying on bunk-bed sleepers.  Elizabeth stares down at Paul (Now viewed by us looking through, from outside, a misty train window streaked by rain.) “She devoured her brother’s face.” says the omniscient author.  The poetry of that tiny scene would be diminished without Decae’s apt and subtle lighting.

If Elizabeth’s identity is revealed on a train, then it’s back to the bedroom for Paul’s inner life.  When he’s dying from having taken poison, Elizabeth taunts him to sit up in bed.  He stares at the latticed, skylight window to see his school friends.  On a winter’s day they press against the glass till it becomes a clear, un-latticed frame.  His life, innocence, purity, and the start of his descent into ill health (The day a stone concealed in a snowball struck him in the chest) is revealed.  And behind all that lies Paul’s romantic temperament heightened by Decae’s lens, Emile Mathys’s set design and Melville’s editing.

This time round, Henri Decae wins out, for me as the most imposing auteur of Les Enfant Terribles.  But the film’s performances also command the utmost concentration: made possible by the casting of Nicole Stephane and Edourd Demit whose faces manage to convey a sexual androgyny on par with Marlene Dietrich and Louise Brooks.  Also impressive are the performances of the two friends Agathe (Renee Cosima) and Gerad (Jacques Bernard).  Unfortunately, the casting of Melvyn Martin as Michael (The young millionaire that Elizabeth is married to for only a week before he dies in a car accident) badly disappoints.  There’s a short scene where Michael croons a song, in English, whilst playing the piano that I found jarring.

It’s often reported that Melville and Cocteau worked well together.  However, they both had strong egos and were determined to retain their own vision of the film.  This was only Melville’s second film, but it bears his individual stamp.  Yet Cocteau still wanted to oversee his personally chosen director.  Claude Pinoteau, the assistant director on the production, says that Cocteau was very controlling of the actors.  ‘Very often when Jean-Pierre said “cut”, the actors would look first at Cocteau to see if the shot had his approval, which naturally irritated Jean-Pierre.’

I delight in that observation for it illustrates the creative tension that kept everyone on edge.  And this edge of intensity still comes through 71 years later.  I can’t of course see film diary footage of its makers behaviour (ah, to have been a fly on the wall) but strongly praise everyone concerned for producing what is still a classic of French cinema.