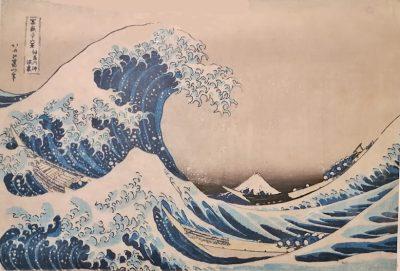 Hokusai: The Great Book of Everything

A selection of 103 drawings from Katsushika Hokusai’s encyclopaedic book of pictures is on display for the first time, at The British Museum in room 90.  This unique and ambitious collection was composed between the 1820s and the 1840s and survived because the book was never published.  Published books of drawings were designed using woodblock prints from original sketches or drawings.  In the process, four people were involved: the publisher, who commissioned the work, the artist, who created the drawings, the block-cutter, who cut the key-block from the sketches, and the printer, who shaded the colours.  The original work of the artist would be cut and destroyed in the process of publication.

Hokusai lived at the end of the Edo period (1760–1849), which lasted more than two centuries (1603–1867).  It was a period of peace, stability and economic and cultural growth but the rules of the social order were very strict and Japanese people were not allowed to leave the country.  Therefore, in The Great Picture Book of Everything (Banmotsu ehon daizen), Hokusai meant to show to his fellow countrymen the places they could not visit.  He illustrated the legends and history of ancient China and Buddhist India and depicted scenes from the natural world as well.  The tension of Hokusai’s art develops between the real and the imagination in an interpretation that seems to adhere to the figurative but actually adds texture and layers in the rendering of minute details and in the sometimes almost abstract figures.  This reveals a sense of magic in the narratives of the pictures that is not only fascinating but also opens up to possible different interpretations of ancient traditions and creates new worlds and new meanings.

Hokusai is mainly famous for 36 views of Mount Fuji in which the famous The Great Wave off Kanagawa is included.  His apprenticeship was initially in woodcarving, then he entered an artist’s studio when he was eighteen.  He painted images of courtesans and Kabuki actors which were very popular at the time.  Later he became acquainted with European art, especially French and Dutch works.  He therefore changed his subjects and painted landscapes and scenes of daily life.  He also became a prolific illustrator, an activity that supported his career, and influenced the Impressionists, such as Manet, Monet and Degas, and also Van Gogh and Klimt.

The drawings displayed in the exhibition are the size of a large postcard and are ink on paper, black and white brush drawings.  They are finely detailed and show great control of the technique.  They are divided into three parts; the first one represents ancient India, the land of Buddha, in which the making of supernatural art and the spirits of ancient legends are revisited and amplified.  In the second part, depicting ancient China, which deeply influenced Japanese culture, the subjects encompass the figures of emperors and heroes as well as the origins of the universe and scenes from daily life.  The final section is dedicated to the natural world and is populated by animals and birds and some plants and minerals too.

Hokusai’s creative process implies that he is making humorous comments on the narratives and conveys a sense of adventure that creates alternatives to traditional discourses, for example the origin of the universe or the powers of deities, adding dramatic elements to the stories.  The pictures not only refer to myths and religious theories but also to practical activities such as medicine, carpentry and weights and measures.  The drawings depicting animals are maybe among the most interesting ones.  The artist did not just copy the figures but also added interesting traits in the elements of the composition, creating hybrids.  The mythical beasts, which had protective functions, wild animals and exotic birds are represented in movement, in coiling and twisting poses with a freshness of sorts that challenges traditional representations.

The book is therefore meant to be a compendium that combines everyday scenes depicting various figures, from members of different social classes to ancient legends, intellectual expertise, notions of nature and the supernatural world of monsters and deities.  It covers all the known world of its time and goes beyond it, transporting the viewer to the faraway places they could not access.  It is a major achievement that demonstrates great artistic skills, an insightful understanding of human nature and the possibilities of the power of the imagination.