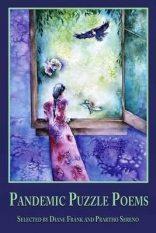 Among other things, like baking bread, the Covid pandemic sparked an upsurge of interest in jigsaw puzzles, an absorbing activity that can be done with close friends in isolation. A year ago, for instance, I started a 1,000-piece Beatles jigsaw puzzle, a collage of their record albums, that’s still incomplete on a card table in a corner of the dining room. The frame’s complete and some areas filled, but Rubber Soul and Sergeant Pepper, among others, are still patchy, and I’m afraid some pieces may be missing.

But the point is that, as Diane Frank and Prartho Sereno note in their introduction to this collection, the quest to bring all the pieces into a meaningful whole is a Zen koan-like metaphor for the process we’ve all been engaged in during this unique time. It’s also an apt description of this anthology, the parts adding up to a comprehensive whole, a representation of this time for us all. Or, as the editors succinctly assert, “This book is a gathering of community.” The voices of 133 poets, in almost twice as many poems, leave us with a picture of the past couple of years of both introspective inward-gathering and tumultuous social turmoil.

Speaking of jigsaw puzzle frames, the poem that kicks off this collection is Michelle Demers’ “Pandemic Diaries: Fragments of Resistance,” a poem in the shape of an incomplete jigsaw, the frame, like my Beatles jigsaw, intact, but large areas incomplete. The frame is made up of the word “No” around all four sides of the rectangular puzzle. Inside, No: “going out”; “kissing hugging “; “symphonies concerts”; “peace till it’s over”.

The rest of the jigsaw that is Pandemic Puzzle Poems is arranged alphabetically by poet, from Calvin Ahlgren’s “On the Rise” (“Worldwide, / how many succumbed to the virus today? / Everywhere the numbers catching fire.”) to Joseph Zaccardi’s “A Day in the Time of COVID” (“I will save and freeze the leftovers; I will write / the details on an index card, because it’s never easy, / never simple to be / prepared.”). In between, a plethora of poems by such poets as Stephen Dunn, Jane Hirshfield, Ted Kooser, Jennifer Lagier, Dorianne Laux, Ed Meek, Claudine Nash, Marge Piercy, Deborah Ramos, George Wallace and Francine Witte, as well as both editors, fill in the picture of a world adjusting to extraordinary circumstances.

Loretta Diane Walker’s “Ode to Cracker Jacks,” Rosalind Brenner’s “Puzzling,” Claudia M. Redder’s “Puzzles During Quarantine” and Betsy Snider’s “Pandemic Puzzle” continue the jigsaw theme. Melissa Studdard and Kelli Russell Agodon collaborate on three poems, including “Quarantine Bingo,” in the form of a 5 x 5 bingo card, also a kind of puzzle, that has verses inside each square, including the hilarious fourth row with such lines as “Home-schooled Your Children While Drinking a Martini,” “Used Curbside Cannabis Pick-up,” and “Organized All Drawers and Closets While Drinking a Martini.” The poem ends in the lower right corner square with: “Looked at Coronavirus Worldometer More Than Ten Times in One Day, Made Martini.” The two poets have another poem lacing humor with the deadly serious, called “For the Past Month, I’ve Felt Like Andy Warhol’s Silver Clouds.”

Poems addressing the social issues during the pandemic also make up the puzzle. Lynn Ungar’s “Necessary Trouble,” In memory of John Lewis, casts shade on “those / who’ve chosen division / over the more perfect union.” “Taking a Knee” by Pat Underwood, with its allusion to Colin Kaepernick’s peaceful protest during the national anthem before football games, likewise addresses the scar of racism that disfigures America. Laurie Kuntz’s “Darnella’s Duty” is about the young woman who recorded the police murdering George Floyd. “Just Breathe” is Nancy Lee Melmon’s poem about Martin Gugino, the seventy-five-year-old man whom Buffalo police slammed to the ground during a BLM protest. Stephanie Noble’s “Now You Know” contrasts the murder of George Floyd on May 25, 2020, with the kid-glove treatment of Peter Manfredonia, a white man on a killing spree the very next day, May 26. Patricia Barone’ “Ten Days After His Murder” and Linda Wing’s “George Floyd’s Bench” both address Floyd’s murder. Wing lives in an apartment next door to the bar/restaurant where Floyd worked as a security guard. Diane Frank’s “Prayer to the Invisible” is addressed to her friend who was killed in the Tree of Life Synagogue massacre in Pittsburgh in 2019. Perhaps the most chilling poem is Ken Pobo’s “Total Darkness,” which addresses the violence of the White Nationalist movement, echoing the murder of Heather Heyer in Charlottesville, VA, in 2017, when a man deliberately drove his car into a crowd. It reads in full:

The Pandemic Puzzle Poems fit together to present a picture of a most extraordinary time. And it’s not over yet! The pandemic puzzle is still incomplete, just like my Beatles jigsaw.