Thesmophoria in ancient Greek religion is a festival typically held in late autumn in honour of the goddess Demeter and her daughter Persephone.  A celebration of human and agricultural fertility, it has been interpreted as the carrying on of things laid down.

That makes it a fitting title for the latest venture of India Rose James, the granddaughter of the late Paul Raymond who founded the Raymond Revue Bar theatre and strip club and left behind a property portfolio covering a sizeable chunk of Soho.

At Soho Revue, tucked away between the massage parlours, James develops the family territory in her own, resolutely feminine way.  Reopened in 2019, the gallery’s mandate is to exhibit emerging artists and in the case of Thesmophoria, only women painters working now in Britain.

It is co-curated by James and Charlie Siddick, founder and curator of Purslane, which she set up in 2020 to shake up the status quo of the art market and direct most of the proceeds to artists and charity.  The profits from Thesmophoria are destined for the Women for Women’s Afghanistan relief fund, to help women survivors of war.

By way of centre-piece, instead of graceful Grecian goddesses clad in white seeking to perpetuate the rule of nature, Lily Mcrae’s The Hypocrites is a blue blur of boorish male drunken arrogance.

The bloated male central figure has his hand raised in what looks like aggression, but he is also under chaotic attack, in part from Mcrae’s technique.

She paints, she tells us “in an almost negative way – applying the paint and then wiping it away – searching through each layer for earlier shape and form and attempting to reveal what lies beneath the surface of each work.  Each painting is an excavation process, attempting to visualise something that has been forgotten”.

It’s a method that you could say sums up the ethos of the exhibition.

Mcrae’s The Drinkers, after The Triumph of Bacchus by Diego Velasquez, takes up the hue of Bacchus’ robes in Velasquez’s brilliantly meaningful portrayal of initiation and turns it into drunken shades of claret.  The result is the equivalent of an over-exposed photograph – or perhaps of seeing the original through inebriated 21st-century eyes.

Her obliteration is at its most abstract in Cobalt and Pyrrole Red when she dives beneath the surface into the entrails of the colours.

In innocent contrast to Mcrae’s loss of self, Jessie Stevenson’s abstraction is about nature, not debauchery.  Her vibrant strokes of blue, green, orange and red immerse us in the light and texture of the Norfolk countryside that provided escape for her in lockdown, where she was “Alive to all things and forgetting all”.

Gina Kuschke’s “I truly don’t know where I’m going” is a giant sprawling asymmetrical diptych of oil on canvas with a blur of colours disrupted by bold black doodles.

As the homage to and parody of all that has gone before continues, Beijing-born Ming Ying explores the zone between abstract and figurative; the coherent self and an identity lost and alienated.  She recalls impressionism and expressionism, once again through the choice of a dominant colour that dictates the mood.

Whereas Kuschke adds coherent titles to her largely abstract blurs of colour, Ming Ying’s distorted, but recognisable green figures and red, pink and white ladies with parasols and children are untitled.

At the same time they imply titles from the male traditions that have gone before in Soho and on other canvases the world over that are now being painted over or wiped off. 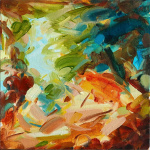 Ballet for Murderers I Start Counting. Review by Alan Price.