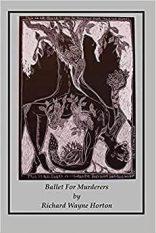 The complete title of Richard Wayne Horton’s baffling new collection is Ballet for Murderers: being the Escape, Travels and final Downfall of a Murderer. The first part of the book, in verse, deals with a character called the Murderer. The second part, five prose fiction stories, complements the first – and some of the tales do involve murder!

At the end of “Bullets And Horses,” one of the five stories that make up the second part of the book, Richard Wayne Horton writes:

The wry observation comes after a stock scene from a B Western in which Maw and Paw, their daughter and a ghost (the ghost, of course, is not a common trope in a western) are sitting down to some vittles in their little home on the prairie when a band of raiders rides up. The raiders aren’t necessarily stock characters either. One spouts quotes from Shakespeare. But here we expect a bloodbath at least, right? Isn’t that what happens when a bunch of outlaws ride up to an isolated homestead where innocent victims are eating a meal?

But nothing happens! A voiceover spells out some possible outcomes, but “Sometimes in the American West, / when the sun goes down, / a mystery remains.”

This scene is like a synecdoche of Ballet for Murders as a whole, a representation of the narrative thrust throughout this uniquely conceived book, just as the observation about endings clues us into Horton’s strategy throughout.

The first part of the collection, the poems about the Murderer and a cast of characters including the Detective and the Terrible Child, seems to be moving toward a conclusion, a denouement. But though the Terrible Child (who appears late in the sequence) seems to resemble a sort of Christ-like guide, the sequence comes to and end with: “Here Ends (Doesn’t End) The Ballet For Murderers.” Talk about anti-climax!

Humor, indeed, is at the heart of Hogan’s work. Despite frequently grisly scenes and allusions, the surreal nature of the narration feels ultimately unthreatening, almost Keystone Cops-like, a joke Hogan lets us all in on, with a sly, inviting wink. The spectral Murderer and the group of characters around him feel like holograms, not flesh-and-blood killers.

Perhaps the most unsettling story of all is the one called “Cat,” in which two brothers, Ralph and Terry, reconstruct and set about to avenge the death of their sister, Cataline, referred to in the title. Cat has been horribly killed by a truck driver late one night. Cat has deteriorated into a life of drugs and transactional sex. Her brothers reconstruct her life and death, remembering her as child and how she got religion before turning to a life of debauchery. They work out where she was living – Nate’s nest – Nate being a guy she’d met when they were volunteering at Windy Hollow Assisted Living Corp, before they got into drugs. Stoners are living at Nate’s nest now. They decide to go to Nate’s nest to exact revenge.

While they are vaguely planning their revenge, their mother, with whom they live, loudly complains about the mess they leave in the kitchen. With deadpan humor, Horton writes, “Funny. They were both planning to commit murder, but they really should have done those dishes.”

At Nate’s, Ralph and Terry find all the stoners asleep. After walking throughout the house, they sit on the front porch, seemingly having lost the urge to avenge their sister. “I could use a beer,” Ralph or Terry says to his brother (Terry or Ralph).

Again, nothing happens! But maybe this comes as a relief, after all the cringe-worthy descriptions that lead up to the end. And maybe this is the whole point, Richard Wayne Horton’s way of telling us, the joke’s on you!