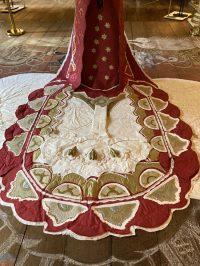 In the serene and historically apposite setting of Firle Place in Sussex, artist Stephanie Smart takes us far beyond the merely fashionable with an exhibition of 11 costumes and an array of accessories that recreates all the seductive ruffles and bows of Regency elegance, complemented by meticulously researched detail and social commentary.

The most extraordinary aspect of her craftsmanship is that the only materials she uses are paper and an estimated 28,000 metres of thread.

The medium is the message.  Like Austen’s irony, it distances and draws us in.  Smart’s transformation of paper into tassels that have all the appearance of fluid gold thread and sleeves that even on close inspection seem to be made of lace is the opposite of the often hasty remodelling of dresses that took place in Regency times as the fashionable set bowed to the pressure to have a new outfit for every occasion.

Smart discovered her preferred material after taking inspiration from a paper tabard she saw in Istanbul long before lockdown curtailed artists’ freedom to nurture their ideas through foreign travel.

The tabard was inscribed with verses of the Koran and was made for the sultan to wear beneath his armour for his spiritual benefit, rather than display.  Like the statements made by Smart’s art, it was shot through with the tension of awkward juxtapositions – war and spirituality; glamour and cruelty.

Apart from a quest to be more than skin-deep, her other motivation in moving on from ceramics and glass – also surprisingly strong provided you are brave, as she says – was envy of her cartoonist brother, who required only a writing implement and paper to work whereas she needed an entire studio.

In lockdown, the decision served her well, as with the help of Arts Council funding, Smart quietly worked away at home perfecting what is her most ambitious exhibition yet.

The 11 life-size outfits culminate in a ballgown displayed on a chalked ballroom floor in keeping with Regency practice.  The chalk made the floor less slippery for the dancers and at the same time was a work of art until it was worn away by the dancing feet.

The ballgown, entitled “Fading Glory”, is also destined to lose its blood-red brilliance over time as it is made of non-colour-fast paper.  Its details remind us of the human cost of Empire and the suffering that was the constant backdrop as the social seasons carried on with their brittle round of mercenary match-making.  Two rows of embroidered teeth down the centre of the ballgown’s train are a reference to the soldiers killed in battle whose still healthy teeth were used to make false teeth.

Smart also seizes on the lighter side of human frailty.

The absurd Mrs Elton in Austen’s Emma is summed up in a work entitled “A Little Ridicule”.  It’s a tiny gold, purple and white tasselled bag that could have held little more than a letter.  Such bags were all the rage and were known as reticules from the French, but often referred to, including by Jane Austen, as ridicules.

After Firle, the exhibition is expected to move on to Chertsey Museum from November to February and then Worthing Museum next year, Smart said.  She is also working on her next project: 300 Years of Shoes – with one handmade paper shoe to represent each decade.

The shoes are perhaps the most complete expression of the issues Smart raises about functionality and fashion, human vanity, transience and artistry.  Each shoe is inspired by a different bird, leading to heels with claws and layers of peacock feathers.  Each has required hours of patient labour but could never be worn.

In the slow time of lockdown, Smart has completed five shoes, which are on display in Firle.  She has 25 to go.