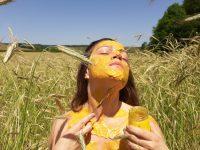 Mustard is the only English thing in the rural Irish home of the young protagonist, named as E, of writer-performer Eva O’Connor’s one-woman show.  It’s hot and yellow and becomes an expression of the harm women inflict on themselves when they are rejected by a man it was an act of self-destruction to love so unilaterally in the first place.

This mustard dependency is odd, possibly mad, but a dramatically effective device, more palatable than razor-blade slashes, to make us begin to understand in the space of an ambitious 55 minutes why self-torture can seem a valid response to emotional torture to a woman who knows she should know better in this supposedly emancipated age.

We begin with O’Connor in sweatshirt and jogging bottoms with two shopping bags.  One contains nothing but jars of mustard.  The contents of the other will be revealed in the course of the action against the simple black backdrop that is highly evocative of the theatre we can easily imagine we are in as we watch online.

E takes out the jars and they sit, full of latency, while she begins her age-old tale transposed to a modern setting.  A lost émigrée, she finds her fortune in an Elephant and Castle nightclub, where she meets a professional cyclist with “a castle” in Crouch End, full of designer bikes, but more importantly, his grandfather’s racer that set him out on the track to success.

Their intense affair is vividly expressed in the rap-influenced poetry of inversion, negation and rebelliously twisted grammar.  We undrown, ceiling-stare, word-vomit and eventually down-peer onto a rival and into a void.  Now, as before her mind-boggled, love-at-first-sight meeting, there is nothing – pronounced the Irish way – in her life.

All that is left is mustard and a return to the rural Ireland from whence she came, where the society we discover is dominated by women apparently abandoned by their men – her religious mother and the women of the “stitch and bitch” circle.

A summons by a voice “like warm water” takes us back one last time to Crouch End, where there is no happy ending and self-harm gives way to revenge, not redemption.

It’s tempting to draw the parallel with the broader English-Irish clash that extends far beyond one failed relationship, but O’Connor does not dwell on the wider politics.  Rather she gives us a young, daring, defiant, energetically-sustained fringe play that’s as strongly-flavoured as mustard.