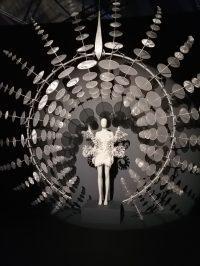 Victoria and Albert Museum
Until 31 December 2021

The blockbuster exhibition on Alice’s Adventures in Wonderland (published in 1865) and its sequel Through the Looking Glass (published in 1872) is a marvellous but unsettling journey through the origin of Alice’s stories and their adaptations and reinventions in films, art, music, fashion, photography and design.  More than three hundred objects are on display and span about a hundred and fifty years.  The exhibition traces their narrative from the first manuscripts and documents handwritten by the author, Charles Lutwidge Dodgson, aka Lewis Carroll, and the enthralling illustrations of the first editions created by John Tenniel to the global phenomenon that Alice’s story inspired around the world.

Carroll’s books were an instant success in a period when children’s books were immensely popular.  However, the common Victorian books for children and young adults were stories with strong moral teachings, while the stories about Alice appear nonsensical and thought-provoking in comparison.  Her adventures challenged the common beliefs of the time, which were based on trusting in the continuous progress of humanity and having a staunch level of confidence in rationality and logic.  These ideas are questioned not just in the stories but above all in the language, which is used in an apparently playful way in the form of puns, satire and riddles.  Therefore, both the structure and the language reflect in a self-conscious way the functions of communication and of meanings from different angles, emphasising the unconscious perspective.  The descent into the rabbit hole is the symbolic equivalent of the exploration of the unconscious, where Alice expresses in images her fears and desires.  As visitors to and viewers of the exhibition, we have the chance to experience the hazards of this fall as well and, like Alice, to discover the inner and most unpredictable sides of our own stories.

Alice’s story has become an incredibly enduring cultural phenomenon in which the imagination is totally unleashed; this gives a space to never-ending possibilities of reinvention.  The versatility of Alice’s character and of her narratives is thoroughly developed in the exhibition, starting from the title.  ‘Alice: Curiouser and Curiouser’ not only emphasises the interest in adventure and exploration, which was a characteristic of the Victorian period, but also points to humanity’s attraction to a world of wonders that makes us dream and rely on a more hopeful future and also helps us make sense of the world around us.

Dodgson was a maths professor at Christ Church College in Oxford and a polymath.  Besides teaching and writing, he was interested in art, theatre, music and photography.  His cultural circle included pre-Raphaelite painters, actors and scientists.  He told the story for the first time to three young girls during a boat trip.  One of them, Alice Liddell, asked him to write it down and so the adventure began.  Liddell herself became a talented independent woman who was tutored by John Ruskin, met Queen Victoria and posed for the famous photographer Julia Margaret Cameron.

The exhibition is organised chronologically and thematically.  The curators, Kate Bailey and Harriet Reed, and the theatre designer, Tom Piper, highlight the main scenes of the book, such as the fall into the rabbit hole, the Mad Hatter’s tea party, the Cheshire Cat and the croquet game.  It is a spectacular show that transports the visitor from the sober Victorian atmosphere of the first room, displaying Tenniel’s illustrations, toys and cards, to the first film productions and today’s influence and adaptations.  In 1903, only five years after Carroll’s death, the earliest black and white short film was produced.  In 1915, a longer movie of fifty minutes by the American W.W.  Young told the story using extracts from the novel.  Disney’s 1951 version is one of the most popular films inspired by Carroll’s work.  It merges scenes from both books and its enduring popularity is highlighted in the display of Mary Blair’s bold drawings; her representations of the characters, such as the Queen of Hearts, Alice, the Cheshire Cat and others, is considered iconic.  Disney also collaborated with Salvador Dalí, who reimagined Alice from a surrealist angle in loose, colourful illustrations.  Tim Burton reinterpreted the story for Disney studios in 2010 and 2016.  The surreal world of the unconscious and the versatility of the adaptations intermingle with the experience of the protagonist and are testified to by numerous posters showing different kinds of productions, from ballet to musicals, theatre, animation films and advertisements in different languages.

The tea party is displayed in a kaleidoscopic installation with a party-inspired menu created by the famous chef Heston Blumenthal that includes illustrations of the Mock Turtle soup.  Fashion designers such as Vivienne Westwood, artists such as Kusama and photographers such as Tim Walker, who produced a Pirelli calendar in 2018 with models who were all Black, were inspired by Alice’s story too.  A revival in the 1960s and 1970s was also influenced by Alice’s experience and revealed how hidden impulses free the imagination and that Alice was an icon for the counterculture of the time.  The final dress installation by Iris Van Herpen, ‘The Infinity Dress “Omniverse” sculpture’ (2019), is a collaborative work composed of over ninety pieces that mingle creative and scientific imagination, projecting the viewer into another world.  Alice’s curiosity is the final legacy that celebrates playfulness and a search for identity.  The last room is made of mirrors that reflect a digital display showing extracts from the novels.  A VR experience is also included in this rich and encompassing exhibition.  In addition, quantum physicists are working on the ALICE project to explore the origins of the universe.  The link between quantum particles and Alice’s spirit of adventure confirms the inspirational nature of her legacy.  She is a symbol of empowerment that passes through positive and negative experiences and looks for hopeful solutions in a boundless universe.