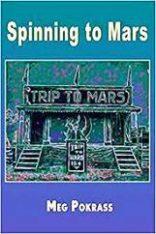 We assume that the unnamed protagonist of all 67 stories in this marvelous Blue Light Press Book Award collection of micro fiction is the same person. Two of the stories are related in the first person, and the rest are roughly half third-person and half second. None is longer than half a page. Especially because the first three deal with an absent father and the final one circles back to the same, it’s tempting to try to understand this woman by her “daddy issues.” Both the first story, “Ride to Mars” (“People will fall for anything. Some dangle the promise of a ride to Mars. Others dangle the promise of home.”) and one of the last stories, “Intact” (“You were on a video call. His virtual background looked dusty and red, as if he was calling from Mars.”) refer to Mars as a metaphor suggesting how remote the dad is. Mom plus Dad equal Home to a kid, and Home equals Love. The protagonist of these stories desperately seeks love. Thus, the title, Spinning to Mars, gives us the image of a chaotic search for that elusive love.

But we’re all looking for love, aren’t we? The epigraph to Spinning to Mars, from Victor Hugo, says it all: “To love or to have loved, that is enough. Ask nothing further.” Not having received the nurturing love of an inattentive, distant dad, the girl looks elsewhere. But she would have anyway, wouldn’t she? We all do. “You wanted to be live on Love Street,” Pokrass writes in a story early in the collection, channeling the Doors’ song. She goes on: “You grew up to be a grown-up who got smoked out by previous lovers after sneaking their animals into your life. The dog was your very first love.”

Toward the end of the collection, in a story called “Home,” the protagonist has moved on, a new home, a new lover. (“Your marriage over, your mother had died.”) Yet she reflects, “For the rest of your life you’d find sneaky ways to feed the memories that scratched on your door, trying to get in.” Those memories are stray pets seeking shelter, trying to come home.

Pets play an important part in the drama of love, as we’ve already seen in “Love Street.” They always have in Pokrass‘ fiction, as the titles of previous flash collections indicate – The Dog Seated Next to You, The Dog Looks Happy Upside Down. The love of pets is simply not as complicated as human love. “Mugged,” “Time,” “Efficiency” “Separation,” “Between Animals,” “Wonderful Cats,” “Dream of the Cat,” “Cat Displacement,” “Feverish,” “Rust,” “Classified,” “Silent Types” – all of these stories feature the love of a good animal.

Of course, there’s a lot of tension between the mother and father throughout the stories as well, which the girl senses, and it corrupts her sense of “home.” At the same time she’s attracted to the “bubble-cheeked boys” of her youth, and here love finds a new magnet. “Boy Music” captures this pubescent attraction so beautifully, in a single paragraph. “You kiss each other’s faces, but the melody comes later, behind the cafeteria.” Other small gems shine a light on these early urges – “Moments with Crochet Hooks,” “Wave Riders,” “Night Heron.”

The concept of “normalcy” is central to the drama. Normalcy seems to represent that conventional notion of “home” for which the protagonist inchoately yearns. In the story with that title, her marriage is falling apart. She thinks about her husband’s girlfriend (uh oh!), a geriatric nurse. “How normal,” she writes, “how stupidly normal her family is, you thought. But this is what he’d always wanted. A practical woman and all the trimmings.” The protagonist is just not “normal,” at least not in this traditional sense. Pokrass writes previously in “Love Street”: “What did you plan to do with your life? Escape normalcy. Find a man with a dog and a walk-in closet….”

Ironically, in the story, “Mute Fantasies,” the ex-husband confesses that “being married to someone else had made him capable of loving her again.” Oy, the strangeness of human love! Give me a cat or a dog any time! No betrayal, no mixed feelings! The devotion you see is the devotion you get!

So does the protagonist find love after all the craziness? The final two stories may or may not shed light on this. In “Greetings,” she meets a new neighbor, a man who looks “like somebody’s missing father.” He “smiled a loopy smile right at you. You could tell he thought you were coming on to him. Men always thought so about you, even though you were nearly a half-century old.” Still in the game, apparently, whether she likes it or not, navigating the trickiness of human relationships.

But it’s the final story, “Truce,” whose very title screams “Mexican stand-off,” in which she meets that distant father face-to-face at last, that clues us in to the permanent theme that will always dominate her life. “He smiles a worried, old man smile. A smile she’s come to know from photographs.” They’re sharing a meal of lobsters, and she’s brought her father a gift, a clear amber paperweight with a cockroach stuck inside. Dad doesn’t quite know what to make of it, and she asks, “What else would you expect from your kid?” There’d always be that question, after all, why he’d abandoned her all those years ago, “right as she was learning to fly.”

The lightning stories of Spinning to Mars are sad and funny all at the same time. Pokrass writes in a compelling prose style and from a perspective saturated with latent emotion, on a theme to which we all relate.