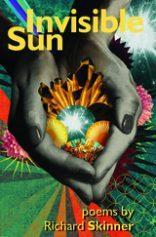 Different angles and multiple unexpected perspectives are explored in Richard Skinner’s latest collection. His poems draw on his own experience of everyday life and of objects seen from an ‘upside-down’ point of view and they also take inspiration from the theories of Viktor Shklovsky (1893–1984). Shklovsky was a Russian formalist, writer and intellectual who first developed the concept of ‘defamiliarization’ or ‘estrangement’ in his essay ‘Art as technique’ (1917) and in his seminal work Theory of Prose (1925). Skinner develops this idea in his precise verses, challenging clichés and realistic repetitive visions of common things and choosing instead a more complex and unusual approach. According to Shklovsky, the aim of art is to experience creativity through the defamiliarization of common objects by presenting them in an unfamiliar or unusual form. This technique conveys a fresher perspective that makes us see the world from different angles. In this way, meanings shift and poetic language creates art. Multiple views are therefore revealed without settling into a defined interpretation. This concept is linked to Derrida’s idea of différance (to differ and to defer) and to his concept of the absence of a centre or of a subject. Thus, the world of art offers an unspecified temporary aesthetic perception that does not imply knowledge but nevertheless engenders new meanings:

Inanimate objects have potential that only the poet or the artist can describe and make fertile, producing fresh images and sensations. Skinner’s technique develops this concept further in the well-crafted form of pantoum in the poems ‘Topoi of Epic’ and ‘Organ of Corti’ that give space to a broader exploration of the concept of light introduced at the beginning of the collection. It is a metaphor for facing the world around us and for the way we experience it in different and peculiar ways:

The approach is purely aesthetic and is connected to philosophy in the sense of a value and an experience, which are linked to taste. This means that beauty is felt as immediate, a pleasure that is appreciated through the senses and is an attempt to understand objects. This understanding is multiple, reflecting different points of view which might subsequently change. Thus, knowledge is never final and is always open to further inquiry.

Skinner uses poetic language to reveal these connections in a clever path of reasoning that runs through Zen, Greek myths, Zuihitsu (a kind of Japanese literature) and the work of Roy Marshall and John Luther Adams. His approach is both loose and profound, deconstructing our certainties and proposing a new open dimension that focuses on the experience of seen objects but also goes beyond observation. Our perception seems to be surrounded by mists that ‘soften our silhouette/so that we no longer/block out bits of the sun’ (‘Mists’). This apparently contradictory way of experiencing reality is reiterated in the concluding poem, ‘Winterborne’, in which Skinner describes the condition of ‘a man lost in space’as being dead and, at the same time, ready to ‘live your life.’ Therefore, disintegration, or the deconstruction of meaning, and stepping into a new dimension coexist. The collection traces a circle that investigates different possibilities for aesthetic perception and experiences in a poetic world of art that is elusive and fascinating in its ever-shifting beauty.