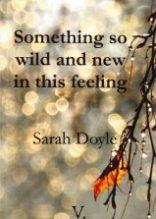 Poetry review – SOMETHING SO WILD AND NEW IN THIS FEELING: Pam Thompson is impressed by Sarah Doyle’s original poems drawn from the writings of Dorothy Wordsworth

William Wordsworth’s poetry owed much to his sister Dorothy’s vivid and precise descriptions of their life and surroundings, in Alfoxden, Grasmere, and on their travels in Germany, France and Scotland as recorded in her Journals. It is the 250th anniversary of Dorothy Wordsworth’s birth, and, in a prefatory Author’s Note, Sarah Doyle explains that she wanted to ‘draw out’ the poetry inherent in the journals, and in doing so, to reinforce how relevant Dorothy Wordsworth’s writing is for our times, not least for its ecological engagement. The poems in Doyle’s collection are ‘re-imaginings’ of the journal entries in a variety of poetic forms. Collage is the chosen technique whereby the poems ‘are comprised entirely of phrases (or parts of phrases) mined from Dorothy’s writing.’ This includes the poem’s titles and the title of the collection. Fittingly the poems reflect Dorothy Wordsworth’s main preoccupations in the natural world such as the weather, the sky, birds and birdsong, places walked:

The stanzas in the rest of the poem follow a similar pattern, each line beginning with ‘Walked’, the second and fourth lines rhyming. The place-names catch our eye as the repetitions and rhymes catch our ear. You really do feel as if you have been on the journey too. The repetition of the word ‘cloud’ or ‘clouds’ at the end of each couplet in ‘More like sky than clouds’ give the poem the feel of a ghazal. There are fifteen couplets reflecting the nuances of changing skies. I was reminded of a time-lapse video which moves from morning to night at a rapid pace. This isn’t to say that the poem moves at a rapid pace but there is a distinct temporal movement through the day:

This distinct temporal movement is also evident in ‘It came on a stormy night’. You could easily believe that this was Dorothy Wordsworth’s narrative of one particular storm but it is all to Sarah Doyle’s credit that she has judiciously chosen extracts from various places to make it appear so. So we move from a description of the gathering storm and how nature looked within it,

and proceed to Dorothy Wordsworth’s feelings of being ‘afraid’. Perhaps to displace those feelings of fear, the poem reflects on one tree, ‘an old larch’ bridging the road and which

Maybe ‘the stormy life’ of the tree, in some way mirrors her own. The poem concludes, in true Romantic fashion, with a shift from perceiving just desolation to one which is more uplifting:

Carrie Etter nails it when she mentions Sarah Doyle’s ‘felicities of phrasing, musicality and ideas.’ Collaging other writings can feel haphazard and awkward or too forced but this is never the case in this pamphlet which feels like both a collaboration and translation. We can easily believe in ‘Homewards’ as a poem written by Dorothy Wordsworth herself, knowing her love of home and reluctance to be away from its solace; the insistent beat of the repetition of the word ‘home’, reinforcing this feeling although there is some unease:

In a reworked passage about the famous daffodils, aspects of Dorothy’s description of them found their way to her brother’s poem:

I like to flick through a pamphlet and see poems arranged on the page in a variety of forms. This is a visual treat before I even start reading. Here there’s even a small concrete poem, ‘beautiful / to see’, about little boats at night, ‘with wings of / fire’ which is in the shape of a small boat. Yet this is not just for the sake of cleverness. The poem opens up on the vision of the

More daringly expansive are poems set across two landscape pages: in ‘when the rain’, the staggered repetitions stress the rain’s insistence and in ‘Snow … in the … night … and still  … snowing’, the generous spacings between words, and between lines, imitate the softness of snow and the various weights of its coverings, the spaces being entirely contracted at the end:

Sarah Doyle’s re-imaginings are astoundingly successful and I thoroughly recommend this pamphlet.