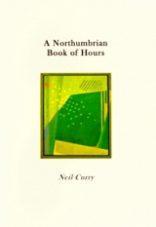 Neil Curry’s pamphlet, consisting of fourteen brief prose poems, is very well worth repeated readings. It has been described by the poet as ‘a journey through time and space’ which ‘follows St Cuthbert’, focusing particularly on Cuthbert’s time on and around the island of Lindisfarne. It is also an elegaic tribute to Brother Columba, a monk at Buckfast Abbey, and a reflection on solitude. Neil Curry’s own sojourn on the island, and his love of it, pervade his descriptions of place, while the canonical hours and the changing seasons provide a structure rich in symbolism.

Prefaced by another of Mike Barlow’s apt and beautiful cover images, which to me suggests a succession of weather across land and sea, this is confidently gentle writing. Curry’s style benefits from and carries lightly a lifetime of experience as poet, biographer, critic, and translator of Euripides, among other interests.

The poems trace the story of Cuthbert, his life, death and the journey made by his earthly remains after a Viking raid on the island in 793.

This is a book in which the alternation of print and white space is important. Most of the poems take up a third of the page or less. There are utterances and silences; each return to silence becomes an invitation to pause for reflection. I’m reminded of Glyn Maxwell’s definition (in ‘On Poetry’): ‘Poets work with two materials, one’s black, one’s white.’

Opening at ‘Prime’, the time for the monks’ rising prayers, the first poem gives an immediate sense of watchfulness.Their praying drives away dark forces that have ‘held sway’ throughout the night. Curry calls it ‘regime-change’, a first taste of the way in which he weaves together ancient and modern language, bending the storyline back and forth in time. This poem also establishes the sequence as an accomplished example of prose poetry. There is no high-flown poeticism (‘fripperies’ amd ‘ostentations’ are referred to disparagingly in a later poem), but there’s clarity, metaphor, (bat, badger and owl as a ‘trinity of killers’), and pleasing rhythm:

At ‘Terce’, the third poem, Cuthbert’s predecessor Aiden arrives on Lindisfarne. Prayers said at this hour invoke the Holy Spirit, asking for strength, and the poet reminds us of the dual nature of such a significant location, said to be “the very place where the Christian religion began for our nation.” There is a need for “constant vigilance” against a looming, potentially malign presence; the landscape expresses this with its

Cuthbert, at this point a young shepherd, senses the death of Aiden and is drawn to Lindisfarne. His life there, his performance of miracles and withdrawal into the life of a hermit, and his association with the protection of birds and other wildlife, are sketched in the smallest of pen-strokes. We learn of the funny, endearing lives of puffins, “little brothers: a clown’s face on a monk’s robes”, and through this tender language, come to sense Cuthbert’s close understanding of nature. Almost before we get to know a little of Cuthert, he dies at the same instant as his dear friend Herbert. Here again, Curry conveys a wealth of detail in very few words:

‘Nones’ (said to be the hour of the death of Christ and a time of temptation), occurs halfway through the sequence. Appropriately, it consists of a lyrical description on the turn of the tide, linked to a quotation from Anthony and Cleopatra. A paused moment, just before significant change, is held in the peaceful air of a summer day:

The concise, episodic prose form allows for powerful use of contrast as the story unfolds. From “meadowsweet and may” to “terrible… portents… fiery dragons flying in the air”, the mood shifts and the Vikings arrive to trample “the holy places with their polluted feet.” The following poem ‘Vespers’ reverts to a contemplative tone. There’s a beautiful, painterly image of winter trees as “a scribbled outline sketch’”; the poet reflects (I think referring to poetry, too):

The lengthy travels of Cuthbert’s remains in search of a final resting place provide an opportunity for verbal humour, including a relishing of place names, a shared coffin, and a return to modern parlance which invigorates the legend:

The penultimate poem, for ‘Compline’, is particularly spare and moving. It progresses from a four line paragraph to one of two lines, to a single sentence that could be read as a description of human life:

Eventually, Cuthbert ends up alongside the Venerable Bede in Durham Cathedral.

I read this Book of Hours as a celebration of the solitary life. Episodes from history – life, conflict and death – are followed each time by meditation. After reading, I returned to the ‘key watchwords’ mentioned on the first page: ‘beholden and accountable.’ How are they connected to Cuthbert’s story? I think the sense of responsibility they suggest has something to do with paying close attention. Cuthbert retreats from the world in order to get closer to it, perhaps as Curry himself did when visiting Northumberland.