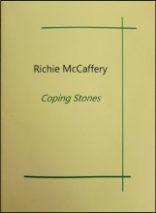 Although only four of the poems in Richie McCaffery’s new pamphlet actually mention the pandemic, it’s hard not to wonder if the opening, title poem isn’t a commentary on ‘build back better’. Remembering having seen ‘the foundations / and crypt of a medieval church / built from rubble of a Roman temple’, the poet imagines making similar use of the coping stones from the boundary wall of an estate, ‘should / these high walls fall’, ‘to make a home // where we would weather it out’. The image is cemented by the implied pun on ‘coping’.

The poem that follows, “Anchor”, which is explicitly about Covid, also rests on a pun, this time visual. Cutting his wife’s hair in lockdown (which may itself be a play on words), ‘russet curls all over the patio – left / them for the birds and their nests’, he’s struck by the fact ‘that they all spelled / the initial of your first name, ‘S’ for ‘Stef’’, which in turn reminds him of an S-shaped anchor plate:

It’s a touching tribute. McCaffery is always on the lookout for connections. They can spark off one another quite dazzlingly, as with the red admiral in “Sermon”:

Not all the imagery comes off quite so well. In “Back to school”, I found the play on ‘blunted’ and ‘sharp’ in relation to a memory of photographs taken in front of an old grindstone rather laboured and in “Abbey” I wasn’t convinced by the idea of the wheel coming full circle at 33? rpm.

The conceits work best when they involve unexpected leaps of the imagination. In “The crab”, a man takes a long run off a short pier, as it were, only deciding against suicide when:

Like “The inverted ventriloquist” (‘Most of my peers threw their voices far, … But I was a different kind of artist, / trained for years to plunge my voice / back down deep inside me’), there’s something of the contrarian about McCaffery. In “The most beautiful”, it isn’t the sight of ‘a ballet of swans’ that impresses him, but a high-tide line the next day ‘of all the shed down feathers, / one swan dead of exhaustion’. And when, in “Vocabulary”, he says of the notebooks he stole from school and still uses:

It’s so different from most people’s experience that I’m not sure I even believe him.

I wouldn’t take too literally either the claim in the same poem that: ‘School reports always said / you showed promise and like all / promises you never kept it’. In someone with a PhD and a successful career in poetry, this sounds like false modesty, as does his chance encounter with an old teacher in “Mr Fleet” (who appropriately says, ‘Time flies’): ‘his waiting wife / is used to this sort of thing, the once bright / meeting him dulled, and she’s keen to get on’. (Pitting ‘keen’ against ‘dulled’ in that way is typical of his writing.)

Beneath the surface brilliance of these poems is a malaise that is hard to pin down, although it’s most explicitly voiced in “Bearings” (‘Here I am in my mid-thirties, lost again / even though you know my location’). “Rosy apples” is about the best friend whom he saved from choking on a sweet that ‘fell – / bagatelle-like – down his windpipe’, now no longer touch, but ‘big up in management, doing well’, and “Fast car” is about bumping into another successful, former schoolmate, who says he has:

This might suggest a feeling of having lost out, except that the poet clearly has different values: ‘I never understood fast cars, you want to show / them off. But put your foot down and you’re gone.’

Perhaps it’s the ‘bills / that keep us down’ (in “Heat”), or an early-onset, mid-life crisis, or just that, as McCaffery has said, the pandemic has darkened the background of the poems. This darkness is a matter of subject rather than mood. The poems derive their distinctive style from their self-assured clarity and wit, which saves them from any hint of mawkishness. The final poem, “Letterkenny”, begins solemnly enough:

But ends with a wry joke, when after leaving their meals half eaten in a café to go outside and pay their respects to a passing hearse, the poet notices a hardware shop across the road:

While apparently uninterested in form, McCaffery has all the wit and delight in wordplay of an Elizabethan poet and although the impulse behind the poems may be too cerebral for some¬—more effect than affect—there is a lot to admire and enjoy in this new pamphlet.