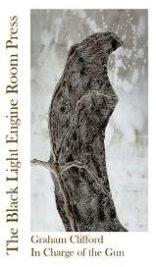 Poetry review – IN CHARGE OF THE GUN: David Mitchell is intrigued by Graham Clifford’s poetic response to the strange times we live in

This is Graham Clifford’s fifth collection in a little over a decade and it demonstrates a prolific determination and ability to express the absurdity of existence with metaphors and quiet despair. In this collection, the poetry portrays feelings of disconnect with politics, science and philosophy. Graham’s poetry exists within the duality of continuing as expected when a crisis is quite clearly occurring.

This being said, the despair comes not from melancholy but from a series of often darkly comic expressions of irony whereby misogyny, inequality, sciences, and ineptitudes of civilisation are all held to account. Collections like In Charge Of The Gun may have lasting relevance to future literary historians. An idea that our plague would change writers’ voices was common in HE classrooms last year, and it is undoubtedly true here. It is noteworthy that, in addition to prolific writing, Clifford is a Headmaster who spent the last year taking responsibility for educating pupils during a crisis. Clifford has had to behave as if nothing is wrong while knowing almost everything is. That duality is explored in this collection’s narratives. Cathartic responses may have influenced Clifford’s tone here, a style he describes as being “left-field as you like, negatively charged and in glorious distemper hues.”

This collection is, in part, a parent’s epiphany. It’s a discovery that they have brought children into a world that they cannot protect them from —a world where History Museums are filled with ‘Skeletons’. In ‘Peaking’, one of many prose poems, Clifford writes. “It’s so great now everything is finished. No need for anymore building or to make cars which go faster.” This poem reflects on how we find ourselves going along with absurd ideas, led by a belief that science represents a solution. Clifford ends this poem: “So I just followed quietly and was soon in charge of the gun.”

In charge of a gun is an interesting metaphor, and it relates equally to scientists, governments, bosses and parents at various points. Clifford is aware that decisions have consequences that are beyond our control. The poetry goes into quite dark topics as it explores this theme. In ‘Chernobyl Children’s Life Line’, the enormity of the theme of school trips for children impacted by historical radiation is contrasted with the ineffectualness of platitudes and words. The charity from which the poem takes its title has existed since 1992. “Their teacher made me feel good when she sympathetically agreed my choice of the word ‘shocking’ was the right word. I tried to pronounce ‘dosimeter’.“

The final stanza is even sadder, revealing it is not only words that show our impatience to protect children: sometimes too our gestures to counter cruelty or disadvantages are almost meaningless. I wondered if the old women and men who maintain the charity inherit a little more of this heat every summer break – and if it felt like sunburn. Or like a version of love.

The whole collection is filled with poetry that requires something of the reader. Although knowledge of Theseus is not essential to reading ‘Theseus’, for example, it certainly helps. Clifford, however, manages to intertwine difficulty, humour and melancholy in a playful manner. The difficulty fits the collection’s common theme: a nagging inner narration that we are never wholly in charge of the gun. Clifford captures a fear that we will simply pass a loaded gun on to the next generation.

The narrative poems, in particular, struck me as having a musicality that can be enjoyed with or without analysis. I particularly enjoyed the more extended monologues in this collection where Clifford is at his best. A good example is ‘Fad’

This is a collection I will go back to and one that might mean something different each time. Clifford is a poet who has been widely published in new and established journals.. It is interesting to see both The Daily Drunk and Rialto in his list of previous publications. Perhaps, in poetry, at least, some things can change for the better. As an early example of how Covid-19 may have changed voices and contributed to fostering what may become known as “Plague Poetry”, In Charge Of The Gun deserves a wide readership.