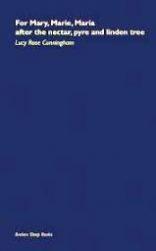 The names in the title of this pamphlet, For Mary, Marie, Maria, imply motherhood or a prayer to a Madonna. I did not find it easy to identify a narrative arc in this pamphlet but came to the conclusion that I could enjoy the flow without necessarily understanding the thought processes of the poet. The pamphlet is split into five sections – with a sequence of poems in each section, and the poems are generally (but not always) separated out by italicised headings. The symbolic words ‘nectar’, ‘pyre’ and ‘linden tree’ in the pamphlet’s subtitle feature in different Sections.

Section 1 deals with a medical intervention and, in the acknowledgements at the end of the pamphlet, there is reference to the nurses at Marie Stopes (perhaps also the ‘Marie’ in the title). Repetition is used frequently to good effect. In the first poem ‘Mary, at 4 today’, there is interplay between what a nurse (we assume) and the patient ‘expected’ and then around the word ‘ate’

Nectar, the drink of the gods is introduced in the next poem ‘Nectar envelops’: ‘nectar is a sticky cradle, /rocking 8 weeks of lethargic lullaby.’ Nectar was used by Aphrodite to gain strength and cleanse her wounds after being injured by Diomedes. In the next poem, ‘She liked its fragrance’, the poet suggests the healing qualities of nectar (in one case referring to her own womb, in another to Aphrodite’s womb, using repetition again):

This Section also has very sensual and visual imagery, for example in ‘Basin Cloud’

Similarly there is striking sexual imagery in ‘Imbibing,’

The pamphlet is peppered with references that I often had to look up. In the middle of Section I, there is a poem, ‘Smoking blue’, dedicated to the Austrian poet Ingeborg Bachman, whose later years were beset by drug and alcohol abuse She died in 1973 when her nightgown caught fire. This poem could be seen to foreshadow the later lines which mention ‘pyre’:

This Section ends with a reference to Maria Goretti, who according to Wikipedia, was ‘an Italian virgin-martyr […], and one of the youngest saints to be canonised’. She died aged eleven when a neighbour stabbed her fourteen times after raping her, but she forgave him. The poet invokes such forgiveness, or self-forgiveness, here, ending the Section:

The linden tree is symbolic of love and fertility but also represents healing. In ‘Unfurling’,

This unusual pamphlet makes full use of the page, with indentation and with some lines right-justified – particularly in Section III. The far-right column in grey acts as an echo and deepening of sensation:

Section IV is very brief and starts with ‘Spoon theory’ when the poet feels ‘white-grey/white-grey like spoons’. The repetition in this poem suggests being trapped in a circularity of feeling: ‘inside rounded tunnels rounded spoons’.

Section V focuses on love and includes a rather beautiful longer poem ‘to New Love’. In this poem, the poet skilfully uses colours, music and dance imagery:

John Cage and Merce Cunningham are mentioned and then in the next poem ‘A lift of bones and breath’, David Hockney enters the poem. This whole Section is steeped in a form of ekphrasis which adds multi-sense richness. The poet also calls on William Burroughs:

The first Section is interrupted by phrases like ‘Please hold.’, suggesting a ‘phone call which is then abandoned in favour of writing: ‘So I wrote’. There is in fact a running conversation throughout the sequences. In Section II, the sequence is broken by phrases about ampersands implying the poignancy of joining together: ‘My ampersand; never ending.’ In Section III the intervention is ‘Sorry I was late.’ The poet’s mother’s voice enters these asides in Section IV and in Section V the Madonna seems to be invoked with ‘Mary, Marie, Maria/ Ave’. The pamphlet ends on the line: ‘this breath voice heartbeat, a solstice prayer’.

There is much to admire in this pamphlet and it has the authenticity of a strong response to experience.