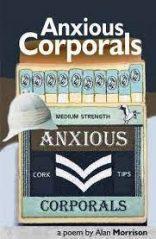 It’s hard not to love Smokestack Books – for me they’re one of the most interesting publishers around, with their status as torchbearers for the ‘unconventional, unfashionable [and] radical’ borne out by their list, and publications like Alan Morrison’s Anxious Corporals. Certainly it’s hard to imagine this polemical, poetic history of working class culture with anything other than Smokestack’s signature red spine; although, when it comes to books, it’s blue spines that interest Morrison – specifically the blue spines of Pelican paperbacks:

For Morrison, Pelicans symbolise a lost working class desire for intellectual self-improvement, which is the principal focus of this 162 page ‘essay in verse’. Splitting into twenty five cantos, it opens with an indictment of the current working class myopia – an ‘ectopic proletariat’ seduced and intellectually enfeebled by the specious allure of capitalism:

Morrison laments the demise of intellectual curiosity among the lower classes, and their potential for critical thinking. He identifies a lost penchant for self-education with a particular character type – ‘Anxious Corporals’, a term first coined by Arthur Koestler in the mid-twentieth century. It denotes servicemen with a ‘thirst for intellectual sustenance’, required less for material self-advancement than to ‘satisfy some / vitamin deficiency of the mind’ [XI, 63]. The type transferred to civvy street, ‘Out of uniforms into muftis, incorporating the lower ranks / Of the middle classes, but particularly the upper-working / Class, skilled trades and blue collars, shop stewards and / Reps’ [XI, 64]. Such autodidacts were intellectually autonomous, with minds more capable of ideological subversion:

Morrison explores this theme of working class self-improvement within a layered and discursive history of class in the UK, quoting extensively from several classic works on the subject – books like Walter Gallichan’s The Blight of Respectability (1897), David Lockwood’s The Blackcoated Worker (1958), and particularly Richard Hoggart’s The Uses of Literacy (1957), which was itself a bestselling Pelican through the 1960s and beyond. It’s a scissors-and-paste aesthetic in parts, but an effective one, particularly when served by the rich and lyrical language of a theorist like Hoggart, whose critique of mass culture underpins much of the middle section of the book. Among other things, he uses Hoggart to explore the consequences of ‘passive receptiveness ‘To synthetic culture and intellectually-vetted entertainments’:

Quotations are plentiful (scrupulously demarcated by quote marks and italics), with Morrison providing perceptive commentary on their relevance, and, with the likes of Hoggart, their prescience. In this sense the poem is very much like an essay, developing a coherent argument, whilst retaining a freewheeling feel, punctuated by delightful anti-capitalist riffing: impassioned, and unapologetically partisan, it often reminded me of Ed Sanders’ exuberant, multi-volume, America: A History in Verse.

For Morrison, the working class thirst for knowledge was eroded partly by Thatcherite philistinism, and partly by a postmodern relativism which ‘scooped out the point / from expression and criticism in order to try and prove ‘Everything is relative, ultimately subjective, intrinsically / Ironic, endlessly reductive’ [XXIV, 145]. Such unfavourable cultural conditions led to Pelican’s demise in 1990, with ‘its 2,878th title, William Sheridan Allen’s The Nazi Siezure of Power [XXIV, 144]. Doubtless you’ve spotted the irony.

Morrison is characteristically cynical about Penguin’s decision to reintroduce the Pelican imprint in 2014:

One can’t help but feel that Morrison’s cynicism is well founded. The good news is that so many blue Pelicans were published between 1936 and 1990 that there’s an inexhaustible second hand supply; indeed, Morrison, in a utopian moment, envisions ‘pop up Pelican Universities’ that might ‘Furnish disenfranchised minds’, offering ‘an alternative world view to conventional education’ [XXIV, 147]. I like the idea, although I’d also encourage people to supplement their blue spine education with a few red spines along the way: Anxious Corporals is an excellent place to start.