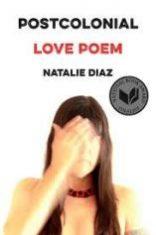 In her second poetry collection, which was shortlisted for both the T.S.Eliot and the 2020 Forward Prize, Natalie Diaz explores the conflict between violence and love, pleasure and pain, colonial genocide and Indigenous resilience, and environmental destruction and spiritual relationships with the land. She is a US-based poet and identifies herself as queer, Latinx and Mojave. In her poems, the English language, the language of the colonisers, prevails, mingling with Spanish and the Mojave tongue in a flowing rhythm that relies on alliteration and line breaks to achieve excellence, creating an alternative way of communicating her viewpoint. She feels brutalised by her own nation, which has persecuted and tried to erase Indigenous peoples from 1492 until today. It is a war that has never ended ‘and somehow begins again’. In her previous collection, When My Brother Was an Aztec (2012), she told the story of her brother’s drug addiction and mental illness, which were the consequence of colonisation. In Postcolonial Love Poem, the destruction of the land and the pollution of water are connected with the murder and marginalisation of Indigenous peoples, a loss that is a threat for all humankind.

White colonisation and Indigenous culture seem always to be in opposition to each other, with different and conflicting points of view, that is, different ways of conceiving life, relationships and the environment. In fact, the effects of colonisation brought Indigenous peoples to the verge of extinction and triggered a long resistance. Nevertheless, they still exist and resist in a radical act that has preserved their culture, although it has been changed in part by the influences of the colonisers. In the dedication, Diaz chooses ‘a way of love’ and remains open to new possibilities that imply disruption and empathy but do not accept surrendering to the colonisers’ act of exploitations. The white gaze separates and classifies according to assumed categories of colours and ethnicities that the poet questions and challenges:

This is the colonisers’ way of controlling, of exercising power and consequently exploiting other populations and/or ethnic groups in order to appropriate their lands and resources. The economic aims are therefore supported by cultural conceptions that diminish and marginalise the colonised culture. Diaz voices Indigenous ethics, speaking about the pleasure of queer love and the centrality of the body that suffers and rejoices with the land. The body is the land – that is, its plants, its rocks and its water. The wounds inflicted by the colonisers are open and fruitful at the same time in a constant creation that is linked to erotic love but also to a transcendence that the poet finds in the land, especially in the relationship between the body and water, the water of the Colorado river:

Environmental concerns are connected with resistance in a comprehensive vision that includes being human in a close connection with the land, which is nourished by water. The river ‘runs through the middle of my body’, she says; the river is her body, a ‘moving body’ – it is a verb rather than a noun, a body in flux that is menaced by pollution and exploitation, that is, by the ongoing colonisation:

The protest is ancient and enduring, as testified to by an Elder Mojave woman’s prayer; she was killed by two rubber bullets while she was protesting against the installation of pipelines. Therefore, the scars of the land wound the body; they are open and fresh, a source of pain but also the place where love happens:

Desire is evoked against the erasure of the self in an affirmation of identity that maps the body, that is, the land, which is nourished by the river flowing through it. Her body refuses to surrender to domination, to the loneliness of the American cities. On the other hand, the act of love implies violence and is both physical and transcendent.

Diaz’s poems display mesmerising images that celebrate the personal and global resilience of marginalised populations who resist and exist by cutting out a space for themselves in an occupied land. This is an endless fight that they must continue in order to be accepted, to have the right to coexist with the dominant culture. Diaz leads the reader on a journey of self-awareness where choices are crucial for the future of personal and global survival. Her compelling poems keep the momentum going throughout the collection; and the poet’s guiding principle for this movement is summed up in her claim ‘we go where there is love’.