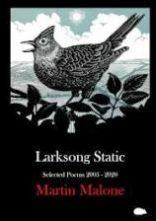 Subtitled “Selected Poems: 2005-2020”, Larksong Static draws on Martin Malone’s three previous collections, as well as various pamphlets. The title, which puns on a lark’s hovering and the warbling static of old radios, is taken from “Barbury Castle”, the first poem in the book and one of a number about a relationship conducted in the landscape around the Uffington White Horse:

There’s a lyric strand that—alongside more hard-edged poems—runs throughout the selection (a strikingly pure example, later in the book, is “What Thought Did”), but if there’s a fault with the earlier poems, it’s a tendency towards sonorous phrasemaking, as in:

In the next group of poems, about his North-Eastern roots, Malone uses more direct language.

Although the poems are mostly written in free verse, “Digitalis” is a villanelle about his father rediscovering his youth ‘Between his first and third heart attack’. Other poems (“Decades”, which puns on a rosary and time, and “Liverpool-Irish”) deal with the poet’s Irish ancestry. There’s one about an aunt who was a fan of all-in wrestling (“Lords of the Ring”) and a very moving poem about parental illness (“Like I Was Your Girlfriend”). Another poem deals with the technical considerations involved in setting up before a sound-check (“Mic-ing the Kit”).

Later, Malone takes us on travels to the Middle East, France and Italy. There is more lyricism here:

But there are more down-to-earth accounts as well:

Back in England, there is a short sequence about a dirty weekend in a Leeds hotel (“Prodigals”), preceded by “Cur”, the title poem of one of Malone’s earlier books, which describes sex in terms of something feral happening between foxes. “Prodigals” itself has Metaphysical echoes:

It’s in the argument rather than the imagery here, although an earlier poem, “Map-Making”, reminded me of Donne’s ‘O my America! my new-found-land’ and “Haas Effect” draws on a psychoacoustic phenomenon in a poem about separation or break-up.

Before becoming a poet, Malone was a singer-songwriter, but—on the evidence of this selection—his poetry responds more to art, with poems inspired by or about Blake, Cezanne, Giacometti, Klee, Paul Nash, Wyndham Lewis and other, less well-known figures. “Mont St Victoire” reads in its entirety:

And it is with visual art that Malone begins the extracts from both his pamphlet, Mr Willett’s Summertime, (“Mrs. Mounter” after a painting by Harold Gilman) and the prose-poem sequence, The Unreturning, (the Kitchener recruitment poster). Both sets of poems result from Malone’s PhD thesis on Great War poetry and without wanting to downplay the achievement of the earlier poems, I feel it’s here that he really gets into his stride, the writing more direct and assured and the poems more ambitious and clearly focused.

“Mr Willett’s Summertime” isn’t, as you might suspect, about the idyllic summer before the outbreak of war, but concerns the introduction of British Summer Time during the Great War, the result of a campaign by builder, William Willett. Although the emphasis of these poems is on the harsh realities, there is again an element of lyricism:

“Let Us Sleep Now” takes its title from the last words of Wilfred Owen’s “Strange Meeting”, Malone turning Owen’s dream of encountering a dead enemy in the ‘profound dull tunnel’ of Hell into a fantasy about sighting him ‘after all these years’ on the opposite platform of the Vienna underground:

(Simmering is the location of one of the city’s main cemeteries.)

The Unreturning is a sequence of prose poems also about the Great War. The prose, which is nevertheless rhythmic, has the advantage of distinguishing these from actual war poems, so there is no danger of pastiche. It also enables Malone to get the detail down with the brevity of dispatches from the front and to make sudden switches and juxtapositions. This is important, because they deal not just with the war itself, but the way in which it has entered the national consciousness. A key theme is the re-creation of war for recreation. In one poem, there’s a computer game, in which:

Another is about the collection of memorabilia (“Webbing”) and a poem linking the war with street gangs (“Aristeia”) refers to a comic sketch (although, as far as I recall, the comedian ‘perfecting the voice: you is, like, dead meat innit, Blood?’ was more RAF than RFC).

Malone doesn’t confine himself to the Western Front, but strikes out into Mesopotamia and the Dardanelles and the returning soldier in “Nostos”—from Mr Willett’s Summertime, but appropriately used here to round off selections from both sequences—is not a Tommy, but a poilu, an ‘Ariége boy, home on leave’ about to commit a crime passionnel.

In a recent interview for The Grierson Centre, which also contains a link to an academic paper he wrote about his First World War project, Malone was asked whether or not he saw himself as a poet of place. He answered by saying that place was no more important to him than time, although certain projects did emerge from his sense of place and he was currently working on poems about Gardenstown on the Aberdeenshire coast, where he now lives. While it’s true that most of his poems are precisely located, place itself isn’t foregrounded, until we come to the poems about Scotland at the end of the book. On the evidence of these word-painted landscapes, set in the present rather than the past, if Martin Malone isn’t yet a poet of place, he may well become one.