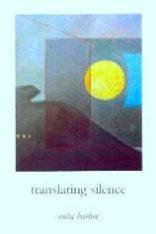 Poetry review – translating silence : Mat Riches admires the consistent and creative evocation of silence in a chapbook by Mike Barlow

Almost everything about this pamphlet suggests quietness. It’s all written and typeset in lower case – all of it, apart from the legal stuff of copyright and addresses on the inside of the back cover, and the occasional first person singular pronoun.

There’s barely a punctuation mark to be seen, with the exception of possessive apostrophes and contractions and one set of brackets. Those brackets are suggestive of a dominant theme of the pamphlet, that of holding things in, keeping them within. The missing punctuation is replaced by gaps and spaces, so we still know when to pause and to breathe, but the absence of full stops, commas and the like is akin to some kind of sotto voce bellowing to keep the noise down.

Such is their commitment to keeping the noise down these poems don’t even have titles, there are no page numbers…almost every distraction has been removed, and yet distractions creep in at almost every turn of the page. Incidentally, even the paper stock feels like it’s been chosen to be smoother and quieter – less resistant and this is echoed in the first poem where Barlow mentions ‘those voices smothered / by the daily din our lives make’.

That interruptions of the ‘daily din’ pop up throughout the pamphlet, for example in poem #2, where we hear

While the book spends plenty of energy exploring ideas around the breaking of and intrusions on silences or peace, there are plenty of examples of unwelcome quietness. To continue with poem #2, we hear about (or don’t hear) the protagonist ‘listening hard / for what it is you’re not saying’, and in the seventh poem we get shown (not told) about a further version of this kind of silence, that of being ghosted through ‘letters not replied to emails ignored’. However, for me the highlight of the book on this theme is the use of ‘it’s playing at charades’ in poem #3. Charades being one the ultimate ways of conjuring meaning and communication out of silence through our actions

The other major theme that runs through the book is that of wrestling with yourself and your own inner noise, perhaps a search through the chattering soul for some semblance of calm. This runs the gamut from ‘the retrospective cluckings of disgust’ about our younger selves during ‘quiet thin-skinned moment(s)’ in poem #4 to rehashing old arguments in poem #9, ‘in Plato’s cave / where walls are plastered / with the shadows of so many / old and specious arguments’. I love that idea of returning to old arguments and the way we often think of the perfect rejoinder or retort twenty years too late.

For all the work that our inner voices can do in undoing any sense of silence, we would be lost without them, and this is never clearer than in the pamphlet’s final poem, where the poet’s inner voice is a songbird carried not on a shoulder, but ‘fast in a cage of my head’. While the poet makes reference to what might be a lack of confidence in their own voice, their greatest fear is the loss of that inner voice, ‘the bright bird I keep you from / whose death it is I most fear’. It’s hard to know whether to read this as a lack of faith on their own voice, a shyness or a poem about writer’s block, but there’s no reason at all why it can’t be about all three or none of these things.

The last poem in Mike Barlow’s previous pamphlet for New Walk Editions, Some Kind of Ghost, starts with the lines ‘Believe me, it only takes a sound, the workhorse / rhythm of diesel, say, bringing to mind/ an old Fordson in a years-ago yard…’. The poems in translating silence feel like something of a continuation of this, where noises get in (or in some cases are trying to get out) and are translated to silence rather than turning silence into something that can be understood by those of us unfamiliar with its language.

Whichever they are, the poems in this little book of calms feel timely and necessary; at the time of writing, we’re in an international state of staying at home throughout the Covid-19 pandemic, and this is having an enormous effect on the mental health and well-being of people. As poem 5 has it, we are