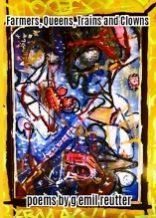 As the title of g emil reutter’s new collection of poetry suggests, these poems are filled with a carnival of desperadoes, hobos, often so bleak but so vividly in your face, you want to cry – and celebrate. The title poem ends like a blues song –

As in the blues generally, the main emotion in reutter’s poetry is an essential sadness or melancholy. But while blues songs are often more lyrical than narrative, so many of the characters in his poems seem to come straight from the blues, and the stories he tells are about sorrowful and dejected people. From “The Cat’s Escape,” a grimly amusing poem about a man who finds himself with a tragic, suicidal drunk (“I looked at you on the couch, turned / opened the door, walked out and followed that cat away from / this place”) to the barflies in “Lonely Nights” and “Trina,” “Chain Smoking Sloppy Drunk,” the almost mystical “Soothsayer” and “Fat Willie the Water Rat,” these vivid characters are all lonesome and forlorn, down on their luck. Take the homeless guy in “Treasure Hunt”:

The poem goes on, vividly describing this character. He does not seem particularly “tragic” in his day-to-day activity, but it’s certainly a bleak picture, well-observed and brilliantly portrayed.

Philadelphia, reutter’s beloved city, is equally a character in these poems. The book is divided into three sections, “A Matter of Time,” “Farmers, Queens, Trains and Clowns,” and “Philadelphia and Other Poems.” Philadelphia appears throughout, its streets, its characters, its neighborhoods, landmarks both historical and personal. From the opening poem, “Under the Pilings” (“Separating the homes of the neighborhood / was a swath of field.”), “All Along Lincoln Highway” and “Harvest” (“Just beyond the woods north of / the development ran Pennsylvania / Route 413…”) in the first section, to “In Fields of Headstones” and “Old Neighborhood” in the second, to a plethora of poems in the final section (“Wissinoming Station,” “Cottage” “A Day in My Town,”,and “Early Morning Philadelphia” among them), Farmers, Queens, Trains and Clowns is saturated in the City of Brotherly Love and reutter’s love of that city. The title poem of the section, “Philadelphia,” which begins “I dream of my city, of Philadelphia,” bursts out, Whitman-like at the end:

So many of these poems are rooted in the specificity of this city. Even reutter’s poem about the Covid pandemic, “We Hear the Numbers,” which could be anywhere (“Normal isn’t normal and the new normal / hasn’t been discovered yet”) refers to Lawndale and the governor of Pennsylvania and the mayor of Philadelphia before hammering home its message:

There is a lot of grief and lament in these poems, but there is also a lot of celebration of life and nature here (“Beautiful Sounds on a Dreary Day” stands out among these verses), including the seasonal changes, the light in the sky, thunder and rain (“A Matter of Time” begins “Pitch black sky an interstellar light / show of distant fire balls of unseen /black holes….”). And especially the birds! Nightingales, robins, Downy woodpeckers, yellow finches, house finches, sparrows, juncos, catbirds, cowbirds, chickadees, grackles, starlings, falcons, herons, eagles, geese, crows and black birds all make an appearance, not to mention the possums, skunks, squirrels, cockroaches, spiders, butterflies, bees, dogs and cats.

Indeed, as Levon Helm and the Band sang, life is a carnival. Just check out Farmers, Queens, Trains and Clowns and appreciate how.