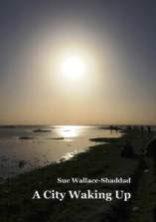 Poetry review – A CITY WAKING UP: Brian Docherty detects the voice of a woke woman in Sue Wallace-Shaddad’s new collection

This short collection of 30 poems follows on from a 2014 self-published pamphlet, A Working Life, which according to Wallace-Shaddad’s wordpress site, ‘reflects aspects of her career with the British Council’. Only two poems in the present book, ‘The University of Khartoum’ and ‘The Talk’ might refer to the author’s working life. What we have is a sequence of poems set in Sudan, often specifically in Khartoum, with four dated to early 2019, concerning the political uprising there. (A BBC News website, 16 august 2019, and a Wikipedia article, ‘Khartoum Massacre’ are informative on these events.)

The opening poem, ‘Meeting Point’, introduces the reader to Khartoum, where

Meetings, personal, cultural and political, inform the poems, while the title poems shows us

while ‘Legacy’ reveals the intrusion of modernity with plastic chairs and escaping plastic bags, and ‘half-built homes’. We move on to poems about the traditional way of fishing, but even here the Nile is polluted with plastic. However the narrator in ‘Fish Feast’ is able to enjoy a ‘royal breakfast’,

There follow more poems about buying food, such as ‘Treasure Trove’, and ‘Al fatur — Breakfast’ which portrays a household sitting down to breakfast, with the shared food listed in Arabic and English. We then move on to ‘Cleaning Tips’, which details the morning ritual of housework; this poem finishes ‘My day has hardly begun.’ Truly, a woman’s work is never done.

Hospitality, rituals, ceremonies and eating together, are portrayed as essential parts of Sudanese life, which makes all the more shocking the political violence that erupts in the book’s closing poems.

For this reader, the seven poems from ‘Toub’ to ‘Departures, Khartoum Airport’ form the centre of this collection. A toub, according to the book’s glossary of Arabic words, is a ‘traditional Sudanese woman’s costume, similar to a sari.’ ‘Toub’ describes this elegant garment in eight couplets, while in ‘Henna Party’, a henana prepares henna as if ‘icing a cake.’

Our next portrayal of Sudanese life, ‘Preparing the Feast’ is of a sheep being killed according to halal practice. Vegans might want to skip this one. ‘White Wedding Night’ follows on, a full scale and expensive event, where everything is filmed, including this

Dukhan is not a dance, but a ‘traditional cleansing smoke bath.’ More wedding food is shared in ‘A Panoply of Sweetmeats’,

After that, a honeymoon in Bali, then in ‘Departures, Khartoum Airport’,

The mood of the book towards the close changes, we move away from the colourful clothing and food, the hospitality and shared events, to ‘Haboob, subtitled ‘Dust storm’, possibly a similar event to Morocco’s sirocco. In this poem we are reminded that Sudan is a desert environment, where

It is at this point, as mentioned earlier, that the book introduces the reader to recent political events in Khartoum. ‘Wakeup Call’, dated 26th January 2019, portrays a victim of the violence. Fortunately, the narrator is not in Khartoum, but watching

‘On the Outside’ is the story of a man arrested and locked up in ‘basic conditions’, but released and free. ‘River of Protest’ is a positive portrayal of of a mass demonstration where

This provides a hopeful note to end on, but as ever, things can change. On 31 August, The Guardian reported that a peace deal had been concluded; but then on 5 September we learned that a State of Emergency had been declared due to the heaviest Nile flooding for many years. And of course, Covid-19 has hit Sudan hard. This leads to my only regret concerning this volume. If Wallace-Shaddad had made this book a 64 page full collection she could have told us more and our reading experience could have been richer, as she is clearly a socially conscious and politically engaged writer. But as always, we can only read what’s in front of us.

Perhaps Wallace-Shaddad will return to this subject in her future writing. On the other hand, however, it may be that her next collection will be quite different since her wordpress site tells us that she has a strong interest in ekphrastic poetry, and that she has an ongoing collaboration with artist Sula Rubens.

One last thing – Dempsey & Windle, who appear to be a relatively new publisher (apologies if this is not the case) have produced an attractive, well printed, properly produced book with no noticeable typos.