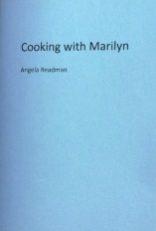 Cooking with Marilyn is subtitled Poems after Marilyn Monroe and includes poems that draw inspiration from both Marilyn Monroe’s life and her acting roles. Work that appears to conflate an actor and one or more of the parts they played usually irritates me because it reduces the actor to their role rather than evaluating them as a person in their own right. However, Marilyn Monroe was a persona adopted by the actor when she was advised to change her name and therefore as much as a role as one of the parts she played.

This is an ordinary baby, yet to learn the seductiveness that will launch a career. The speaker seems to think that this scene of the baby’s innocence is important, especially the detail on the pillow. The speaker’s ‘overalls’ are practical wear or a uniform, the kind of clothing that renders the wearer unimportant. The soft vowels of the last line echo the sense of deflation. The baby seems to have stolen or will steal the speaker’s ambitions.

Real-life Marilyn spent some of her childhood in orphanages and care homes, unsure of who her father was and partly-raised by her birth mother. Readman’s poem ‘Orphan’ sees the girl parcelled off to foster homes with frequent moves,

The girl doesn’t forget the abuse she suffered but tries to turn it into material for her future adulthood when she would relish her high maintenance status and luxury, while never forgetting that she was once denied these things.

There’s a sequence, ‘The Scent of Mrs DiMaggio’s Bedroom’, which has one short poem for each of the nine months of her marriage to Joe DiMaggio. In ‘March’, the sportsman husband says

This plays on one of Marilyn’s famous quotes about only wearing a certain perfume in bed; and it seems her sports-playing husband isn’t too keen on the scent rubbing off on him. He prefers her washed-clean of Hollywood glamour but fears that stripping her of glamour will erode the woman he fell in love with.

In the title poem, we see Marilyn baking,

‘Tongue in teeth’ could be a play on the phrase ‘tongue in cheek’ but its image is of a child absentmindedly sticking out their tongue in concentration, a habit usually grown out of. Even something as domestic as baking bread is loaded with sexual images. A regular baker would remove rings before kneading dough so the final image is a reminder that this person is not domesticated, would never have watched a mother or grandmother baking or cooking.

Two poems refer to one of Marilyn Monroe’s most famous film roles – that of of Sugar, a jazz musician, in ‘Some Like it Hot.’ ‘Nobody’s Perfect’, a famous line in the film, tell su that ‘Sunrise is a blonde with her roots coming through.’ In ‘Some Like it Not’ Sugar listens to jazz, thinking of instruments,

Cooking with Marilyn uses the persona of Marilyn Monroe and some of the parts she played as an instrument to look at issues of how women are portrayed and treated. Effectively the persona became an instrument played through a male gaze and this is how Norma-Jean Baker was lost in the transformation into Marilyn. Marilyn never lost sight of her rough beginnings, parcelled into an orphanage and through twelve foster parents and she was well aware that her image was that of a plaything, not a full human; but nevertheless she strove for self-improvement despite never overcoming her embarrassment at a lack of schooling.

Each individual poem feels quirky and intriguing, but through the collection they strengthen one another. Angela Readman has created a series of vignettes that cumulatively address and question how women are treated and the roles they are expected to undertake.