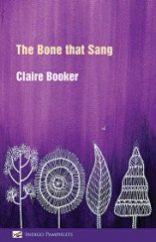 Over the last few years Indigo Dreams has emerged as a successful voice in publishing, winning both the Saboteur Award for most innovative publisher, and the Ted Slade Award for services to poetry. With no public funding, they produce around 50 books a year, (full collections and pamphlets), as well as three magazines. On top of this they run the annual Geoff Stevens Memorial Prize. Quite an impressive feat.

Now here are two new pamphlets, hot off the press and a welcome distraction in the gloom of a lockdown winter. I was impressed by the new branding, both being crisply illustrated with the same finely drawn flower/fauna images with a background of purple, which seems to me far preferable to the ad hoc covers of previous years.

Both poets explore what it is to be human in an uncertain and sometimes cruel world. Isabelle Kenyon traces a woman’s journey from childhood in all its squeamish confusion, to a fragile yet hopeful adulthood. These are poems that are deeply internal, suffused with images of blood, sex and female vulnerability. They are unsettling, raw and uncompromising.

Everything has the potential to be an instrument of pain and fear, and Kenyon is not afraid to lay it all out on the page:

These are poems that question the poet’s identity and currency in the world:

Yet, she finds her courage: ‘The night I found my feet could run and find their way in the dark.’

These are poems that move away from the confinement of the institutions, family, school, church, the expectation of sex and marriage, and into a freedom where images of the natural world abound – for instance, water, leaves, the heat of a summer’s day.

The shapes of the poems jump across the page in disjointed phrasing. Kenyon likes to use dashes and slashes, sentences that are short and jagged and sometimes slide into each other with gaps between words like a sudden intake of breath. At times I found this constant shape changing got in the way of the voice of the poem. Was this experimental structure taking precedence over substance? But maybe this is a device to illustrate the difficult and sometimes messy landscape of a young woman’s quest for identity and self-love.

Claire Booker also traces the human experience across the world in her pamphlet, The Bone that Sang. But where Kenyon’s poems are deeply personal, Booker always remains in the background, a keen observer of life in all its forms. These are poems that are sharp, spiked through with humour, and so cleverly written that they often take you somewhere you don’t expect to go.

What starts out as seemingly hopeful tale of an asylum seeker dreaming of entering the Olympic Games, quickly turns into something far darker.

Just went you think you’ve got the feel of the poem, Booker confounds you with an ending so brilliantly and audaciously spot on that the laughter stuck in my throat. I won’t spoil by sharing it here, but will just to say that it concerns a couple of plucky pigs.

This is what is so fabulous about Booker’s poems – you can’t quite nail them. She is a poet difficult to place; she travels the continents from Antarctica to Asia, often focussing on the human condition. She likes to reel you in with a juicy opening, and it is no surprise to find that she also has considerable experience as playwright, for the poems that have a theatrical feel:

We wonder what game she is up to now and then are told:

Skip to the end and you will discover this is a poem about a passion play staged every ten years in Bavaria, where the major roles are shared by two actors. But of course, it is about more than that. Look closer and you will see this is also a story about the human lives behind the story.

Booker is like a modern-day Scheherazade, weaving tales that pull you in and transfix. She is clever at not quite ending the tale, leaving the thread dangling so that you are left wanting more. She also trips you up, quite literally as a paving stone in one of the poems:

She likes stone, caves, ivory, bone and she digs and excavates to find what lies beneath and revealing it to us. Or she might introduce us to Mrs Nkumbo in scrutinising detail as she sits in the student clinic. We all watch:

We want to look away, but we can’t.

This is poetry that spans so much, is so beautifully crafted and arranged, I sometimes longed to discover the personal, the real Claire Booker in there. Looking again, I found small clues, possibilities of her own secret narrative, but she is giving nothing away easily. It is a testament to her talent and craft that I kept looking. You will return to these poems again and again, and each time they will reveal something new and unexpected.