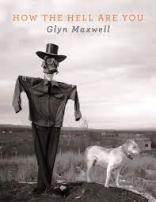 Poetry review – HOW THE HELL ARE YOU: Michael Bartholomew-Biggs appreciates the highly individual worldview revealed in Glyn Maxwell’s new collection

In his latest collection, How The Hell Are You, Glyn Maxwell takes appropriate notice of subjects he addresses very seriously in his excellent teaching text On Poetry. Time (sometimes accorded a capital T) and the blank white page (and its relationship to black type) figure in many of the poems. For the blank page we have to wait till page 27, but time crops up in the very first poem “The Strain” which warns us that anything that has wanted ‘to be young forever’ has always had to face the truth that ‘the snag to this was time, time needed / taking out. ‘

A more ominously enigmatic reference to time comes in “Advice To The Players” – evidently directed to the cast of a production of Hamlet. The poem offers the repeated injunction ‘don’t play the ending’ because to do so would involve having to

These lines suggest that the players (and perhaps the reader too) do not fully understand the enormity of what they are engaged in. Other poems in the collection also explore this experience of being less in command of a situation than one supposes. “Blank Page Speaks” questions whether a poet really has total control of the tools of composition. The empty page uses sardonic and patronising tones to greet the poet’s appearance first thing in the morning ‘in a ragged gown to do your business’ – the business being

(While we are here, I will note  the small neat rhymes ‘theme of/dream of’ and ‘go now /snow now’. Maxwell makes frequent and effective use of rhyme in this collection in ways that are often unobtrusive and rarely fall with the heavy thump of a dreaded second shoe.)

If a page can rebel against the supposed authority of the writer then what else might prove unexpectedly recalcitrant? Perhaps poems have opinions too – like those expressed in “One Gone Rogue” which begins with the claim that ’No one made me, nothing did.’ and continues

Other poems in the book also fail to “know their place” and give their own, usually contrary, views. Maxwell too is prepared to set aside conventional relationships between poet and reader by doing something akin to breaking the fourth wall in a theatre. For instance, in “The Light You Saw” he confides ‘This poem ends, you can see if you dip your eye. / Dip it and lift it again and be here with me.’

Self-opinionated poems are one thing, but a more far-reaching and sinister rebellion seems to be brewing in three poems about Artificial Intelligence (AI) progressively slipping out of humanity’s control until it declares

There is more in these AI poems than rebellion however. They remind us that, while humanity has prided itself on exploiting AI, AI has (presumably) had a chance to learn from its observations of humanity and to detect an increasing tendency prefer black and white categories to the gentler nuances of ‘maybe and let live and who in heaven / knows’

AI’s further deductions and their consequences are outlined in the rest of the poem and they are not pretty.

What has surely gone noticed in the extracts quoted already is Maxwell’s use of echoed or closely-repeated words. This often produces sentences that seem to fold and re-fold upon themselves so that subsequent clauses clarify or qualify or even contradict the opening. A good example is in “Plainsong Of The Undiscovered” (which I find to be one of the book’s most thought-provoking poems). The opening stanzas need to be quoted at some length to illustrate the point:

Is it fanciful to think the subtle shifts of viewpoint and of emphasis are matched by the way occasional indented lines give the impression of the poem shaking its head and re-focussing?

The layered phrases in “Plainsong Of The Undiscovered” ask to be read quite slowly and deliberately; but elsewhere words pour down in a more helter-skelter fashion. In the book’s title poem we have

I find these unguarded and tumbled-out words quite moving. The poem seems to capture both the boisterous incoherence and the suppressed pathos that characterises much present day public discourse. “How The Hell Are You?” is presented as a (stylised) conversation – but much of the rest of the book also has a conversational tone to it and mostly uses everyday language. Since Maxwell is a dramatist as well as a poet he is very good at making speech sound “natural” even when it is much more artfully constructed than real-life dialogue can hope to be.

There is much more to admire in the collection and two longer poems deserve particular mention. “Thirty Years” is a delicate tribute to Derek Walcott both as fine poet and as teacher (‘…the wince is yours / when the line-break’s wrong …’). “Pasolini’s Satan” is based on the film version of The Gospel According to St Matthew and is an intriguing re-imagining of the wilderness confrontation between Jesus and the Devil in which Satan puts on his ‘dead banana black shoes’ in order to tread the desert’s ‘hideous fahrenheit’.

Almost inevitably in any collection there are a handful of poems which don’t seem to me to match up to the subtlety and inventiveness of the rest. Perhaps these were so successful at being deceptively simple that they deceived me into dismissing them too readily. But this is a very small negative remark and I can say for sure that How The Hell Are You is a book I have compulsively kept re-opening and re-reading. And I have found fresh pleasures every time.