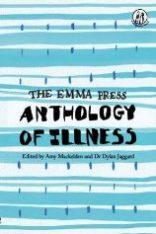 An Anthology of Illness

Poetry Review – THE EMMA PRESS ANTHOLOGY OF ILLNESS: Angela Topping gives a sense of the variety in this collection of poems dealing frankly with the experience of being sick or injured.

Uncomfortable topics like illness touch every human life, but sometimes it is hard to talk about them. It is good to see an anthology on this theme, as so many people can identify with it in some way, while hearing the voices of those with conditions that are more unusual or serious than they might have experienced themselves.

The first poem, ‘Terms and Conditions’, by Samara Bolton, is the perfect opener. It’s a welcome to the world of chronic illness. It uses official jargon style, neatly medical, undercut with italicised ‘small print’, which tells the truth:

This poem is darkly witty, and prepares the reader for the different moods which emanate from this wide selection of poems. It contrasts the public view of the chronically ill with the reality of their experience. For example, number 4 discusses invisible disability, with the caveat that people will try to offer cures and advice, or dismiss the suffering claiming they have felt the same. It concludes with a list of side effects, like that appearing on a prescription information leaflet, with the additional warning that medication may cause further side effects.

Many different aspects of the theme of illness are reflected in this book. Medical staff are featured in Sharon Black’s ‘The Problem with Good-Looking Oncologists’. The old joke from Carry On Films and the like, about male patients being aroused by a young nurse giving them a bed bath, is beautifully reversed, as the female patient is distracted in her breast examination, by the film-star good looks of her doctor. Alongside the narrative of the examination (removal of garments and so forth, and the doctor expanding the slides from the mammogram) there is the narrative of arousal inside her head. And while she is afraid of giving any physical sign of it: ‘my nipples… harden like winkles’. It’s a powerful way to remind the reader that ill people are still sexual beings.

Stephanie Conn writes of a woman giving her body over to a machine, so doctors can diagnose the problem, in ‘Cross-Section with Contrast’. The speaker is ‘stripped’ of her jewellery, a wedding ring and a necklace from daughters, and thus feels emotionally naked. The reference to the heart in the last line implies her emotions are irrelevant to the machine and therefore to the medical process: ‘machines / that ignore the heart in favour of the stiller organs’.

‘Outpatient Appointment at 11.40 a.m.’ is an unnerving poem. Marian Fielding writes of being examined almost in silence, the patient’s mind detached to protect itself: ‘I float my mind’. The contrasts between coolness and warmth help to create the scene. The doctor’s breath is ‘cool, as an anaesthetic’ but the dread of the diagnosis is a blanket, implying warmth. The doctor’s hands are warm, but the couch is cold. The poem conveys a sense of detachment by its skilful rhyme scheme, which is alternate, and uses half rhymes and full rhymes to keep it subtle. The most brilliant line is ‘The unsaid saturates the air’. These five words are very powerful, leaving the poem on a knife edge of questioning.

Pain is an extremely difficult thing to write about. Everyone’s pain is unique to them. The NHS uses a pain scale of 1-10 but that is a crude way to describe it. Metaphor can do better. Paula Harris, in her long-limbed poem, ‘I am a pantheist and don’t believe in god but there have been moments when I have prayed to some people’s Imaginary Sky Friend’, explains why she doesn’t believe in god, because she’s still alive and has to be imprisoned in her faulty body. Her pain is ‘A stampede of frightened elephants who were trampling over my intestines’. The word ‘frightened’ is transferred to the pain from the speaker, and small details like the dust on the lightbulb stand for the mind clouded by pain. However, I sense a note of self-mocking, as she tries to do a deal with the god she doesn’t believe in. The speaker is looking at herself objectively, and finding it faintly ridiculous to be so desperate. Her language is blunt and honest, another strength: ‘a toilet bowl filled with blood and shit’.

Chronic pain is hard to live with, and Hollie Richards gives the reader an insight into Ehlers-Danlos Syndrome, in her poem of the same name. She has to resort to giving a negative definition, telling the doctors what it is not, in order to get them to understand: ‘I don’t mean the fatigue’… ‘I don’t mean the stiffness’ and so on. The pain is alternatively ‘the crowbar’ ‘the vice’… ‘the knitting needle’. These are all things she has to deal with all the time, but the current problem is the twist in her neck. There is a sense of not being believed because there is nothing visible to show the pain, no mangled limb, no cut or scar. This is what is it like to live with an invisible disability.

Coping with life is another thread. Eating, drinking and sleeping are all problems for the unwell. Emily Brenchi-Sluman has her disease threaten her, in the sinister poem ’At 21’.

The disease aims to turn her glamour into ‘warm shit’ and cut short her dancing days, make ‘every vertebrae in that spine/ slowly crumble’. The illness takes delight in doing that, and in her public shame when no-one gives her the help she needs. It is understandably a bitter poem, in contrast to her other contribution, ‘Acute Care Ward C’, where being in the ward makes her observe others there and feel linked to them. ‘We are no-one’. The drip stand she is attached to is an unwelcome friend she must take everywhere, even though it screeches.

Eating is also relevant to mental illness. Jane Burn’s poem about bulimia, ‘Eating Myself to Death’ is like a controlled scream, an outpouring of emotion, kept in line by poetic form and imagery. It reads like a confession, and a journey through debilitating eating disorders that once ruled her life. First anorexia: ‘I lived /through numbers – 300 calories, size 8, size 10, 23 inch waist. / It’s all about control’. Later bulimia: ‘Gorged my pain – / if I was fit to burst, then I was numb.’ The refrain of numbers is played out again, the figures contrasting with the earlier ones: 5000 calories, size 24, sertraline, 50mg, Prozac (too many), months spent in therapy, 38. This litany of numbers is an effective structural device to control the pain. The third movement of the poem is one of acceptance, of healthy eating, of trying to stay alive, finally understanding the reasons behind it all. Sharon Black also has a poem on the same topic, but with an entirely different structure. The first stanza of ‘Binge’ uses a scattered open field structure for the first stanza, a list of all the splurged food, in its randomness, whereas the other stanzas about the purging, are brief and plain, with anaphora in stanza three showing the multiple reasons:

There is also a gap in three lines of stanza four, giving pauses, which suggest she is looking for the right word, the right taste and smell.

Louisa Campbell’s ‘Cones’ tackles mental illness head on, like a car that’s ‘full-beaming towards you’. She lists all the euphemisms for insanity, in italicised groups of three, in the poem, such as ‘loopy, doolally, deranged’, and explains how she is treated when she tells people this, deploying metaphors of entrapment in a jar, being coned off, or embarrassing people. Again, the reader perceives a self-mocking tone, which keeps the poem’s mood light, until the touch of danger at the end, with the implied car crash quoted above.

There are plenty of poems in this anthology which stand alone and do not fit into these main points. Holly Magill, in ‘Vulnerable, Adult’ writes of a horrific date in which the speaker is patronised because of a disability, by a lonely and rather pathetic man who wants to look after her, when she needs no such thing. He is the needy one. His perception of being the one to do the looking after is out of kilter. The start and end of the date are represented by the beer mats. He can’t bear to put a drink down on the bare table, but at the end, she tears up both beermats as she leaves, a clear rejection of his inept advances. Jane Salmons also touches on love, in ‘Kissing Disease’. She and her friend are at a holiday camp after their ‘O’ levels, hoping to learn kissing from boys. The speaker catches a sore throat; her friend catches a Bluecoat. This poem exactly catches what holiday camps used to be like, with nylon sheets and awful food. It is a coming of age poem in which the speaker discovers what real friendship is, and the following year goes somewhere much nicer, with a better friend.

There are many more good poems I haven’t had space to mention, but all reviewers can hope to do is offer a flavour of the poems gathered in an anthology. There is a rich variety here for the reader’s enjoyment and interest.