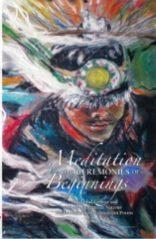 Poets are Not the Only Tribe

This is a book that stands out from the crowd. I could say that it has originality, but that might sound like a cliché for where is the book of poetry for which that claim is not made? It would be statistically accurate to say that Meditation on Ceremonies of Beginnings is unusual: both in subject matter and in the manner of its gestation.

The author composed these poems over many years, without thinking of publication. They are his personal reflections on historical events in which he was deeply involved; he would write them in the margins of meetings; he would give them away to colleagues and friends as personal tributes or testimonies.

In a preface, Thomas Davis explains how he was drawn into the campaigning movement that promoted schools and colleges for Native Peoples: initially for the Menominee Nation in Wisconsin, more widely for Native Americans across the USA and then – as things developed – with First Nation Peoples in New Zealand, Australia, Canada and finally even further afield. We sense the passion that Davis and his colleagues and fellow campaigners felt; we learn of their debates, their struggles with bureaucracy and their own naivety, and eventually their progress as they found a way forward, the outcome always uncertain.

Most of the poems are written in the familiar free verse of North America, in lines which move between some very different poetic registers.

Some almost slip into being a note of a meeting. One for example is entitled “At a Kellogg Foundation Meeting in Mesa, Arizona”. This is no dry bureaucratic memo however as it describes the unbridgeable cultural gulf between a University Chancellor and the Native American representatives. Lyricism beaks out in another which is endowed with the prosaic title “The First Meeting of the Tribal College Presidents, Maori College Administrators, Faculty, and Students in Hawaii”:

Much of the writing takes on the form of drama in replaying dialogues that have moved the writer. One heartwarming poem recites Thomas Davis’s conversation with a rebellious student who had been expelled from the dorms; another gives us a senior tribal leader reminiscing about his dealings with the Navajo, the Sioux, the Winnebago and others. To me, as an English reader, the monologues and dialogues of Robert Browning come to mind. The context however is thoroughly American – as in a long poem which, while being a eulogy to an influential woman, records her courage and that of her father in resisting the Ku Klux Klan in North Carolina when the Klan turned on Native Americans.

One major poem that particularly stands out is “September 11, 2001”. As the title warns us, this commemorates that dreadful day of terrorist attacks on the USA. It does this in an original and personal way however. Thomas Davis was in Washington that day for meetings which, like meetings all the world over, were to be interrupted as people rushed to find television screens and the unbelievable unfolding of the news. We have in this poem both a shared public tragedy and a very personal memory: Davis recounts how that evening he walked with another towards Georgetown trying to find a restaurant that was open (‘The great city was quieter than I would have believed possible’) and then a few days later driving home, instead of flying, by rented car from Washington DC to northern Minnesota, a huge distance bridging eight states.

Towards the close of the book, as his poems come more up to date and reflect the now international movement for colleges and universities for indigenous peoples, we find poems written in Canada, Australia and elsewhere but especially in New Zealand. Something of the spirit of Thomas Davis’s writing can be found in these lines, taken from “Calligraphy of Hills”: