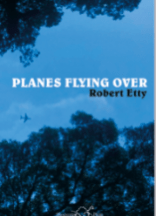 Robert Etty’s latest collection is very much up to the minute with badgers that ‘ignore social distancing guidelines’ and an old watch ‘self-restarting shamefacedly / as if it’s heard that lockdown’s unlocking’; but the poem that most struck a chord with me in relation to our current plight was one about a power cut in a local chemist’s shop:

For a brief moment, this foreshadows the problems that pandemic lockdown has caused our fragile, service-based economy (truly, a nation of shopkeepers).

Etty inhabits the ordinary world, in which people email and Skype and where the land is worked by John Deere and New Holland tractors. What he looks for is the unusual in the everyday. The first poem in the book, “Unlikely Weather on the Marsh in March”, describes an unseasonably warm week in spring:

Even non-events are noteworthy, as in “ON THIS SITE on June 16th 1452 Nothing Happened”:

What counts as unusual may sometimes depend simply on Etty’s off-beat way of looking:

The flatness of Etty’s Lincolnshire home territory makes the sky a dominant feature and both the weather and birds figure prominently in his poetry. But there are badgers and foxes, too. By writing about them in human terms, Etty doesn’t so much anthropomorphise his animals, as point to their difference by comically applying human criteria. In “Asking Foxes”, two countrymen argue about which of two foxes is the dog and which the vixen:

The title poem, “Planes Flying Over”, is from the second section of the book, which deals primarily with narrative and reminiscence. In it, he recalls spending time in his childhood lying on his back, scouring Lincolnshire skies ‘the blues of Humbrol paint lids’ for aircraft from RAF Binbrook, and sets this against memories of feeding hens with his father:

Their constant activity is no more productive than Etty’s supine plane-spotting, but they can’t help it:

Etty himself has wider horizons. The section ends away from Lincolnshire in Boscastle, Burford and finally New Zealand.

The third section of the book is predominantly about characters: Grace, who’s early for everything, because she’s late fulfilling her life; Scott, who can’t fix a date at the bank, because the harvest might be due; ‘Ex-truck driver Douglas’ fretting about potholes outside his house; Daniel, who leaves his wife sleeping, as he drives off into a new life, wondering how she’ll react when she wakes; or the eccentric Miss Mikkelsen, who regularly holds up queues with her fumbling and around whom myths of a glamorous early life have accrued.

Etty’s poetry is characterised by its close attention to detail, but what marks the poems out most is their playfulness. Right from the beginning, he subverts our expectations. While other poets might go for enigmatic titles and punch-line endings, his first poem is the self-explanatory “Unlikely Weather on the Marsh in March”, which finishes with the parenthetical: ‘(A poem about Sunday follows below)’. Some of his titles, such as “A Dawn Chorus …” quoted above, are almost pedantically specific (e.g. “Four Sentences About Weather and Pigeons Soon After Dawn in January”, or “After Turning out the Bedside Lamp, 7th May 2019”, or “December 30th, 15.50 Approximately”). The splendidly surreal opening of another poem:

is given away by its title, “A Short Dream with a Kettle”, although that may be better than a ‘then-I-woke-up’ ending. Later, Etty blindsides us by inserting among a series of poems about childhood reminiscences, one that describes him queuing for a donkey ride behind ‘girls in Frozen T-shirts’, so it’s not about his childhood (‘I’ve looked 70 plus ever since I passed 60’), or is it? No spoilers here, other than the one that Etty himself provides in the title, “Seaside Story, or Imagining Donkeys”.

The language, too, is playful. A favourite trick is to juxtapose the same words used differently (‘shop assistants decline to assist’, ‘at traffic lights that don’t lighten it [i.e. the traffic]’; ‘the ghost of the thought of a ghost’; ‘whose mind’s a black hole of black hole information’; ‘patients patiently queuing’). This could be a useful way of reviving dead metaphors, but it’s used so frequently that the trick becomes more a tic and I began to wish that Etty had rationed himself a little more. It’s noticeable that this mannerism occurs less frequently, if at all, in poems about the past or other places, as if Etty were using it to spice up familiar territory that may have become a little too familiar.

In the final section of the book, Etty gives his humour free rein with a poem about misheard names that stick and another about Phil Baddeley, who’s tired of being told he’ll feel better soon. More general misunderstandings are the subject of “Given Time”, which appears to be about a Skype call, and “04.30: Something not Understood”, prompted by a radio programme about George Herbert, the inversion of which could be about tuning into snatches of all-night radio. “Some Facts about False Impressionism” might be to do with pretentiousness in the arts, the loss of a common culture, slap-dash social media, or all three. The fact that I’m unable to pin the poems down precisely may be part of the point.

Puzzling aside, Etty’s poetry is generally marked by its accessibility. The quirky humour in this very enjoyable book is guaranteed to put a smile on your face during these testing times.