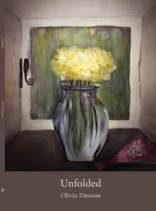 I had never considered how a folding fan might be constructed before reading Unfolded. The pamphlet contains a card with a sketch of a fan and the technical terms used to describe its anatomy such as guard, ribs and leaf. This addition proves essential to reading several of the poems that follow. Olivia Dawson is clearly fascinated by the integral parts and raw materials of inanimate objects, particularly fans, and uses these to explore human relationships in original and imaginative ways.

The poem that gives the pamphlet its title “Unfolded”, is short and disturbing:

It’s not only female exploitation that is suggested here: neglect is implied too as the fans become pathetic, unused and unloved, languishing ‘with twists / of silk clinging to their ribs’.

Dawson excels in short poems, often in couplets or tercets, but her versatility is shown by her use of different forms and space on the page. “Moth Knitter” has five line stanzas with indented second and fifth lines, reflecting the knitting pattern (stocking stitch) the narrator is using as she copies the wings of different moths:

The line breaks are surprising and emphasise the first word of each stanza while maintaining the shape and rhythm of the text. At the end, the speaker deliberately prevents the moths leaving the house, a macabre twist to the story:

Other writers or artists can act as inspiration for Dawson. Her poem “Unstill” is a response to Philip Larkin’s “Home is so Sad”. The narrator’s vase belonged to her mother and she instructs the owner to fill it to the brim with immortelles or ‘lollipop daisies / like disco lights’ to brighten the house. The celebration of life and renewal is in contrast to the grief felt for the loss of a parent. The poem concludes:

The internal rhyme emphasises the physicality of memory and loss, particularly smell and experiencing the physical pain of bereavement.

A different sort of loss is captured in the poem “Reject” in which the narrator has given her once-loved dress to a charity shop. In simple, sensual language we learn about its history in an intimate relationship and the fact the dress is still flirting, lifting the ‘Marilyn skirt’ and reminding its owner: ‘I once / performed / for your touch.’ These delicate, understated few words tell us much about what has changed and been lost.

One of my favourite poems is “Double Act” in which a domestic chore is transformed into a tender, loving tribute. The speaker deliberately leaves her partner struggling to put on the duvet cover while she watches him through a keyhole. Then:

A similar artfulness is employed in “Kissing Gate” as the narrator presents ‘my practised pout’ to her lover who responds by ‘stunning my mouth into a winter rose’, a wonderful line that conveys the sudden flush and bloom of sexual arousal as well as its enjoyment.

Taking the symbol of the ampersand, Dawson imagines it as different images – a knitted stitch, dangly earrings or a link between a couple ‘h& in h&’. This playfulness and wit is also reflected in the poem “Endnote” which cleverly uses footnotes at the bottom of the page to reveal what is really going on in the relationship portrayed:

I can thoroughly recommend this debut pamphlet and am confident we will hear much more from Olivia Dawson in the future.