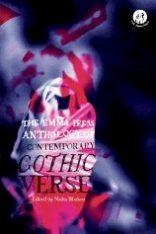 Who does not love the Gothic? Nisha Bhakoo has collated an enthralling book here, an array of poems which give the whole concept a modern twist, wrapped up in blood-red endpapers The scene setter is “Urbane Gothic” by Cathleen Allyn Conway, who sees the Gothic in the heavily made-up girls who come out at night, glamorous yet tawdry like vampires. Their hidden menace is evident in lines like: ‘Pale creepy girls / who don’t like sunlight and can’t be / seen’. Laurence Schimel, however strays into a Faerie land by crossing a bridge out of the woods. The speaker throws flower petals into the river, which are seen as offerings, and as an invitation to exchange gifts:

I enjoy the spell-like quality of this poem, which is helped along by the rhymes, and the way it sits in contrast following “Urbane Gothic” with its nicely punning title. This opening pair of poems invites the reader to look for the Gothic in every setting.

This ‘town and country’ of dark fantasy is peopled with oddities, some recognisable, some dreamed up in the poet’s mind. We know the story of Bluebeard, but Sofia Rhei (translated by Schimel) gives us a series of variations in “Bluebeard Possibilities”. Most place the last wife in a position of power. I think my favourite is the wife who pretends to be dead, and by her actions, revives the other wives; but the idea of Bluebeard marrying Pandora is wickedly funny, and very appealing. Caroline Hammond’s poem, “The Sorceress” takes us back to an urban setting. The speaker gives us her life story, and again uses spell-like rhymes:

That last word sneaks up on the reader, even though the rhyme has prepared the ground. The repetition of the rhyme sound three times gives a dying fall, but the poem’s final couplet shows there is still magic to be done:

In “Opening the Witch Bottle”, Suzanna Fitzpatrick is a little in love with the witch in the bottle she’s holding, and longs to break it to release the spirit inside. She ponders the ‘witch-resistant metal’, including tactile details like the tarnish, and the witch’s rage, in lexical choices like ‘irked’, ‘simmer’ ‘hopelessly’, ‘desperate heat’. By the end of the poem, she has become one with the imprisoned woman, ‘Let out our breath’. The reader too wants her to ‘snap the neck’ and meet the spirit of the witch.

Angela Readman’s speaker makes herself into a doll, over time, with things she finds on the beach, memories and old rubbish, but no heart. When she makes the doll breathe, she substitutes it for herself and no one notices. This is a symbolic narrative full of dark charm, an account of how we all construct a version of ourselves suitable for the outside world, and even lovers, to interact with, while retaining the self. It is very tactile:

Richard Yoder’s poem, “The Ordeal” and Pauline Yarwood’s “The other bride” are two nerve-tingling narratives. In the former, a man drowns his mother, ‘in another life/ at one of the empty spaces of the world’. Yarwood’s poem is about two couples meeting on honeymoon and making friends. Coincidence after coincidence becomes increasingly disquieting, until one couple is invited to visit the home of the other… only to flee on discovering the other couple have put together the same two wallpapers! Both poems have a circular structure, Yoder’s starts with the drowning and ending in baptism whileYarwood’s begins and ends with the wallpaper – but in between we have been prepared for the final escape. The reader would surely have fled too!

David Keyworth’s speaker in “Bucket and Spade”, is a seaside ghost, having fun scaring people, or rattling the gambling machines, hiding in coffins on the ghost train, hanging out with goths. The seaside in winter is a strange liminal space and this poem exploits that, and is very easy to visualize. Anna Woodford’s poem, “Liminal” is set at a Buddhist centre in Ulverston, where she imagines the ghost of a benefactor stays close by, her legacy to them ‘a bit of gold leaf’. This is an oddly comforting poem.

Two long-lined poems by Anna Kisby have been thoughtfully set sideways on to preserve the form. Coming across them and needing to rotate the book is slightly unsettling, a visual surprise, mimicking the way Gothic fiction holds elements of shift and turn. These poems both have unsettling narratives, full of mystery and astonishingly good phrases. ‘The Watchmaker’s House’ is a ghost tale spanning New England and Devon and involving a visit to a watchmaker with a now dead lover. The language is seductive and spell-binding: the watch maker’s ‘socked footfall’, ‘time-mender, time-bender’, ‘owled Devon night’. In the end the watch maker serves as the mediator between the narrator and the dead-lover’s ghost. Kisby’s other poem brings a tang of pumpkin into the poetry of Emily Dickinson. “Pumpkin Pie, I Tell No Lie” is a weirdly imaginative fictional memoir of the poet by a girl who lived opposite. It’s a world of black squirrels, thrown daggers and rolling pumpkins, setting fires and self-harm, darkly funny. These two poems conclude the book, and leave us disquieted and entertained.

There are lots of other good poems in this anthology, and the reviewer cannot mention them all, but merely aim to give a flavour of the work one can discover within. The scratchy black and white drawings by Emma Dai’ne Wright pop up like ghosts and certainly contribute to the atmosphere. It’s a great anthology to curl up with on a drear afternoon, or read by the fire on a winter’s night.