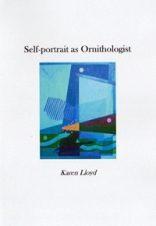 During the early days of restrictions on movement due to the coronavirus pandemic, many of us found new pleasure in the sound of birdsong which no longer had to compete with traffic noise and other sounds of human activity. Those of us who are city dwellers discovered that our unpretentious local parks provided a welcome glimpse of a countryside that we could no longer visit. The poems of Karen Lloyd put eloquently into words some of the gratitude that I have been feeling for such small natural blessings.

The opening poem “Robin” displays the poet’s descriptive powers: the bird’s song is ‘a small waterfall of sound’. But – like the white space in a poem – the silences are important too because they ‘let in the sound of the wood breathing’. In her enjoyment of this encounter with a robin, however, Lloyd does not lose sight of the fact that she is viewing it simply on her own terms and recognizes that there is an uncrossable boundary between the bird and herself. Hence the ‘sweet wall of song’ may in fact be a defiant ‘keep away’.

There are many other splendid and evocative turns of phrase throughout the book. The noise of snipe drumming is described as the sound of ‘hollow dispatches’ that ‘travelled through us as if certainty was suspended’. And Lloyd can be equally skilful at pin-sharp portrayal of human artefacts: tracer bullets observed on an army firing range become ‘neon memoranda’. Other memorable examples include ‘penitent cormorants’ and a ‘vagrant gannet’; an incoming tide with ‘two edges of water meeting / like lovers after absence’; and lapwings that are ‘looping flags of gossip’. An entire poem about pond frogs teems with vivid images

Along with so much celebration of the natural world there is often – as in “Robin” – a subtext which suggests that all may not be as delightful as it seems. Lloyd makes us aware of darker themes that exist alongside the brighter, more appealing ones. “YouTube” expresses regret that many people seem to take reality more seriously if it is mediated/filtered through a lens and digital reconstruction. The poem begins

and further verses see us taking our devices to the woods and sea-cliffs. But are these actual settings simply ‘waiting while we press rewind’ to return to a time when we simply looked with our eyes? “Selfie” is a somewhat similar lament about the self-absorption of a young woman in the midst of a spectacular landscape who

The collection’s title poem also has dark but more enigmatic undertones. While seeming to record the passing observations of a bird-watcher, it clearly speaks of loss of something more serious and more sorrowful. Children leaving home perhaps?  Or maybe old friendships?

There is a very plain and anomalous juxtaposition of nature and a man-made artefact in “The Piano in the River” (which I take to be based on an actual observation). Lloyd creates the image crisply and economically

In the last few pages of this short collection Lloyd reveals a talent for humour and wordplay. “Cleaning up the Neighbourhood” deals with various anti-pigeon measures including ‘slates wiped clean from gigabytes / of accumulated pigeon data.’ “The Moth Problem” is a lively sketch of a man not very successfully chasing an intrusive moth round the living room while his wife ‘all thin lips and persecution-complex / is shouting instructions from the corner near the door.’

The book effectively concludes with the last-but-one poem “Genesis” which is a very broad-brush fantasy about creation and environmental damage and includes an image of God setting out to clean things up with ‘a bucket, some cloths and a Brillo pad.’ This bravura conceit seems to me to overwhelm the delicate poem “Wren” which is the actual last poem of the book and would surely have been more at home among the earlier pages. This however is my only small complaint about a fine and rich collection.

As with all Wayleave publications, this little book is beautifully presented with warm maroon endpapers and a striking cover image by Mike Barlow.