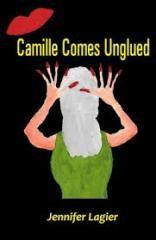 Camille Comes Unglued opens with an epigraph from the legendary feminist, Gloria Steinem (“The truth will set you free, but first it will piss you off.”), and indeed, from the very first poem, “Tiny Agonies,” we see Camille getting pissed off (“She is fed up starting every morning / with elevated blood pressure”) – owing to the grim daily news from Washington, and only a few poems later “she morphs / into vindictive, fury-pumped beast.” (“The Beast”)

In “Goddess-zilla Gets Woke,” we read that “Rage bubbles inside her,” and a few poems later, in “Edges,” “She transforms into tough Amazon, / her lean physique, a taut, knuckled fist.” Finally, in the title poem, the pious misogyny of a Southern anti-abortion politician sends her around the bend.

“No Resistance, No Thoughts of Their Own,” a rant about the racist-in-chief, Moscow Mitch, Sean Hannity and Faux News, ends on the reflection: “This is how democracy falls.” Camille is seething.

But politics aren’t all that’s got Camille down. A septuagenarian, the indignities and betrayals of the aging body also consume her. As Leonard Cohen famously sang in “Tower of Song,” I ache in the places where I used to play. This is the reality Camille faces. The poems, “Her Golden Years,” “The Dead-Before-Death Gang,” “New Complexities,” and “Love Beds” are all meditations on this theme. The poem “Turned and Walked Away” begins:

Yes, Camille is pissed off. Will she be set free? In “You Grow Transformed” she reflects, “When sexy men approach, / latent estrogen flares.” But later in the poem:

But Camille does not go postal. She does not give up. In the final poem, “Your Friends,” she considers her cherished friends and the meaning they bring to her life. “They have each other’s back, listen without judgement.”

So don’t worry. Camille may have come unglued, but she is unbowed and unbound! She’s just biding her time. She’ll be back….