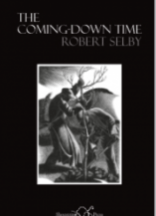 Poetry Review- THE COMING-DOWN TIME: Mat Riches suggests that Robert Selby’s poetry is not to be rushed either in the reading or the composition

Time is very much the essence of this debut collection from Rob Selby. Time shifts as he uses his poems to look back to the late 1800s in “Upon The Altar Laid” before bringing us more up to date, in the last of the collection’s three sections, “Chevening”, which is set in contemporary times. However, while it is largely about a relationship with a woman from Canada, this section still manages to hark back to the themes of the Great War found elsewhere.

The Great War is a theme that is threaded throughout the book, and it’s one that could initially appear off-putting. Do we really need another poet to tell us about the war, especially one they weren’t part of? However, while the war is mentioned, these poems have more to do with life and lives led and the war is mainly used as the way in.

The opening section focuses heavily on Selby’s Grandfather, and for the first five poems we get the back story of a man who ‘came from a long line of men who worked/ now-extinct equine trades’. The end of the first poem, “In God’s Prevenient Grace” more or less sets up the whole of the first section with its quotation from Ecclesiastes 12:1, ‘Remember / now thy creator in the days of thy youth.’

There is much talk of what occured before the war came to play such a role in his grandfather’s life. We get beautiful descriptions of the place he grew up. In “Orford”, we told of a town that now ‘stars in colour supplements: / the Crown has become a high-end hotel / and restaurant owned by a TV personality’. And in “Elysium” the poem opens by almost asking why would you want to leave such a place; but it does provide an answer to its own question.

And it’s that ‘He returned…’ which forms a key part of this collection and its focus on the war. Selby always pulls attention back to the before or the after. As he puts it in “We May Allow Ourselves A Brief Period of Rejoicing”, he ‘press[es] play on a paused life’. The modern world always finds its way back however – for example the same poem mentions a “record player / that, later, became a CD player.” or the aforementioned ‘TV Personality’. TV makes another appearance later in the excellent “Team Photo”, where Selby describes a photograph among a set of framed pictures ‘of five grandchildren’ near a ‘TV with fake wood trim’.

It’s notable that the only time his grandfather actually speaks is in “Visiting Day”, the man himself almost always recalled through memory or in the context of other actions. In “Team Photo” he could easily be the man behind the camera, taking the picture, but that lost story is ascribed to ‘superstition, / a fear that the lens would steal his soul.’

However, Selby is a constant presence in the poems, from his own recollections, hovering over his grandfather’s life in the first five poems; but he makes his entrance in the sixth to measure himself against his grandfather in “Visiting Day”.

And this measurement quite literally continues in the next poem, “The Divide” where ‘Tea is served in glass cups too hot to hold. / He stirs two sugars into mine, three into his own’. This comparing of himself or holding his grandfather as a yardstick reaches its zenith in “Saturday Morning Football”.

The second section of the book shifts away from the personal memory—at least to begin with. In the first poem of this section, “The Winter Wood”, Selby muses on the way we absent-mindedly leave our presence in nature, in the form of things like ‘scarves that were gifts on Christmas Day’ or ‘a neatly folded Barbour / or pair of hiking boots’ in woodland. They, and other items, form ‘knitted limbs of knotted fabric / standing testament to the losing habit’.

Loss and what’s left behind continues as a theme in “Sycamore”, where a ‘smithy’s boy’ props his bicycle against the titular tree, leaving it behind as he goes off to war. Not long after this the ‘creeping sycamore began a slow advance’ and after the young man’s death at ‘Passchendaele’

Nature finds a way, things continue, and the poem also has a lovely echo from the first section of “Orford”. The ‘Trossachs became a National Park’, just as in the earlier poem ‘the Crown has become a high-end hotel / and restaurant owned by a TV personality’.

Following these poems, the mood and themes start to shift away from a sense of war into a new area. The sub-section of “The Galilean Moons’ shows signs of where Selby might head in any next collection, the poems’ shorter lines and subject matter instantly standing out from the preceding ones. That said, he still can’t resist a sneaky military reference in “Ganymede” with ‘the bomber’s moon, / the brilliant craters / blasts of flak-fire.’ I wanted to shout ‘Let it go’ by that stage.

However, this is also the section where he tries on different characters, for example in the dark murder-revenge poem of “An Aurelian Watches His Wife” in which a husband observes his wife as she plans her affair with the young scholar that lives with them—the wife tired of being ignored by a husband always out collecting. Even his comments aimed at her and her planned assignation ‘above a beech-screened / eloper’s inn’ are framed in entomological terms. The scholar ‘is like the caterpillar of the Large Blue, // leaping dead-eyed from his Thyme leaf into / my credulousness.’ Then, as if to suggest he is not naïve, the husband obbserves ‘But I’m no just-born mayfly, / urgent on his first and final day: you want he who chops firewood in the copse’. At the end of the poem, the Aurelian still studying his wife, racking her almost as if with a butterfly net, he has ‘slipped from credulity’s chrysalis, / these mild hands possessed of a length of twine’.

This section also introduces us to actors, statues in America and a land girl before we start to see more of Selby enter the frame, this time focusing in on the more personal. A key example of this is “The Firecrests”, when, out on a bird walk, a couple are looking at a possible bird sighting

It’s one of a few moments dotted throughout the book where Selby is looking forward rather than back. It sits alongside the poem that closes the first section and is ostensibly about a garden gnome, “Wilf”, the bicycle of “Sycamore” and an old tree that’s clinging onto life in “Wild Cherry”. These are encouraging moments.

The collection’s final section is one long poem called “Chevening”, a country house in Kent that also, quite appropriately, lends its name to an international award—The Chevening Scholarship— and is rumoured to have been an inspiration for Rosings Park in Pride and Prejudice.

In this section of the book we see all sides of Selby, the more formal version, the lovelorn, the military historian (even in what is mainly a love poem), the evocation of a pastoral (and past) England, but also the hopeful. The poem is about a love affair that has yet to be fully realised between the narrator and a Canadian woman who has had to return home. Largely told in recollection, it recounts a trip to Chevening and the surrounding area. Before we get to the stolen kisses while at Chevening, we find them visiting an ornamental lake.

I liked the way the poem is laid out as if descending a terrace or steps at a National Trust house, but I enjoyed the flash of humour more. It’s a relatively rare sighting, although some of the situation and settings in the earlier poems have flashes of comedy about them.

While the final section of the book is largely spent looking back at what has happened, the shift to the present tense in the last three lines is pleasing and suggests a potential future for both the relationship and for where Selby might go with his next work.

Prior to the publication of this book, Selby had edited a “Selected Prose” of Mick Imlah, and to a degree you can see Imlah’s work rate has rubbed off here. Rob Selby has taken his time with this collection. “Your Bright Jays” been around since at least 2013, published in The New Statesman https://www.newstatesman.com/culture/culture/2013/05/your-bright-jays and has barely changed since then. The ‘cardie’ is no longer defined as ‘red’ and a gerund has been replaced with an intransitive verb. This stuff takes time…but I hope it doesn’t take the twenty that it took Imlah to produce his second collection.