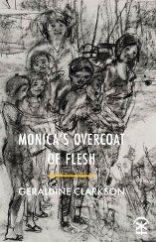 This is Geraldine Clarkson’s debut collection but her work is widely acclaimed and features in three pamphlets – Declare (Shearsman Books, 2016), Dora Incites the Sea-Scribbler to Lament (smith|doorstop, 2016), and No. 25 (Shearsman Books, 2018) – and also as a selection in Primers: Volume One, edited by Kathryn Maris and Jane Commane (Nine Arches Press, 2016).

Clarkson’s work is characterised by linguistic virtuosity and subjects that thrill and surprise. She clearly draws much from her own life, her Irish roots, and the many jobs she has done, not least the period of time she spent in a silent monastic order, including some years in a South American Desert. The collection is divided into three sections whose individual headings are a play on words in the main title: [monikers], [overcoat], [flesh].

A note at the back tells us that the title poem draws on an image, found in many mystical traditions, of the body as a garment. I like notes at the back of collections and these are particularly informative. I read the title poem as a mother rehearsing the ‘what ifs’ if her daughter should die,

Or perhaps she may have ‘inveigled the boatman’, this girl, who is ‘rusticate, tangle-haired, red cheeked’ and who wouldn’t come when called.

In just this poem alone we get examples of the word-play, textures and patterning that characterises Clarkson’s work. Monica/monikers – names and characters are important as are their rich back stories, often realised as prose poems. Take ‘Catalina’. This is another of several dramatic monologues, the speaker, here, identifiable as a poet, reflecting on the different ‘monikers’ she has been called through her life:

The poem provides an autobiography via names and places, the heard and mis-heard:

This is witty and touching, the whole poem, a vivid and enticing story whose ending returns to the boat metaphor of its beginning:

A note elucidates some of the poem’s several layers: ‘St Catherine of Genoa (1447-1510) wrote a Treatise on Purgatory, and there are hagiographies which mention her kissing lepers, eating maggots, and even sucking the pus from the wounds of plague victims’. These notes reveal the many-layered nature of Clarkson’s poems. ‘Leonardo and the Birds of Clay, Enclosed’ is a ‘sonnet, undone’. It is a prose poem which contains an ‘embedded’ sonnet in bold type and is influenced by the work of Philip Nikolayev. We can read the sonnet for itself and as part of a lyrical narrative about Leonardo’s fashioning of the birds:

Prose poems of varying lengths feature, each differently striking in its subject and turns of phrase which you could never predict. ‘My Mother, the Monsoon’ – doesn’t that title draw you in? – is a mini-narrative and an effervescent character/relationship sketch, ‘Mother has a climate change for a personality’. I have become one of the draughts in a stately home, brocade-curtained and visited nostalgically.’

The word ‘surreal’ has been used about Clarkson’s poetry so it is fitting that the collection includes a poem which responds to a Salvador Dali painting (‘Three Surrealist Women Holding in their Arms the Skins of an Orchestra’ – Dali, 1936). It tells the ‘story’ of an unnamed woman and communicates ideas of transformation as does the painting,

What makes Clarkson’s poems so compelling is that their wonderful imaginative flights are grounded enough in the real to keep us reading. In ‘She has the words –’ Clarkson writes, ‘A few brandish victory-scarves / in upraised swaying arms’. More than a few, I’d say, if this exciting collection is anything to go by.