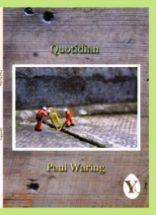 The cover (by Lorna Faye Dunsire) of Quotidian is a gem – two miniature workmen in orange gear and hard hats are levering a life-size, to them, yellow paperclip into a gap in the pavement. And it may say ‘Quotidian’ on the cover, but these poems are by no means a run of the mill collection of day-to-day versifying. These satisfying poems each have a purpose – they work, like the men on the cover, towards an end, not perhaps with a paperclip, but with ideas.

Paul Waring employs a vigorous working vocabulary to illuminate his concepts, as in the opening poem ‘Water Stories’:

He wryly considers the ‘Man On A Train’:

and following such deep reflection, he takes a high-spirited bounce away from the quotidian into ‘Of All The Things’:

Waring is certainly capable of varying the mood, just as in real life our days will dawn under a different sun each morning. In the poem ‘On Bedsits’ he employs an authentic imagery:

He draws such a convincing picture of quotidian life in a bed-sit – “a one-bar electric fire / that eats fifty pence pieces” that one knows he must have lived it himself (I have lived that life as a student, although in my time it was shillings not fifty pence pieces that ran the meter). And he must have had close experience of student parties. ‘In Summer 1973’, in a series of couplets: “Then someone says Karen’s crying / in the bathroom because people are smoking and shagging / in the bedrooms.” Sounds familiar? Waring very much hits the nail here; he can also, in ‘A Long Walk’, produce some pleasing metaphors, conjured from his Liverpool days:

The elegiac poem ‘Mother Tongue’ becomes evocative of boyhood, and of “somewhere we once / called home”, and falls to musing on a lost language …

Paul Waring is a true poet who uses his words carefully and concisely. He can give us, in one short sentence, at the same moment an image of the world, and a philosophy to cling to; his very last words in the book, from the poem ‘Mouth’ are “… reminders that even on dead-still days / like this, a river always has something to say.”

Quotidian is a collection of ingenious and well crafted poems, worth anyone’s while to read, and read again.