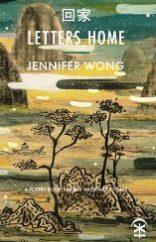 The title of Jennifer Wong’s third collection is printed in both English and Chinese, an indication of what is to come in these poems. Born in Hong Kong, with Chinese as her first language, she studied at Oxford, and subsequently lived at different addresses across the UK. Is there a single ‘home’ for her? what is ‘home’ anyway? The question of how far home and identity overlap is central to her poems. Wong uses the detail of her own life as a starting point while allowing these questions to emerge gradually; they are not forced in any way but they are consistently present. It all makes for a probing and challenging collection.

She sets out her own dilemma in the opening poem, ‘of butterflies’

It’s a poem of ambivalence, with ideas of time and place couched in apparently simple vocabulary, within the framework of the philosopher Zhuang Zi’s thinking of a butterfly — ‘the butterfly of unknowing’ — who is between two worlds. It’s a lightly-drawn, delicate sketch; although it’s British summer time, her watch (hidden in a drawer) is set to another time zone. It’s not just about geography; is she a girl or a woman? In these layers of time, could she be both?

In ‘Diocesan Girls School, 1990-1997’, where the girls ‘sing English hymns from the blue book’, before reading Jane Eyre, learn history from the British standpoint, and start ‘to fall in love with Plath’ the future looks straightforward —

Shaped by this education, the future looks so clear to teenage eyes. Over the page, however, are two poems containing Chinese text, explained in the first by context and in the second, ‘King of Kowloon’, in notes. They are reminders that language isn’t an abstract, something talked about, but real; it’s a practical difference which she has to confront in real life just as the reader has to come to terms with it on the page. In later poems, when she is addressing English speakers, Wong will use transliteration and this means I can pronounce the words aloud, although that has no impact on my understanding. It’s a subtle way of underlining our difference while accepting that this is how it is. In ‘Daughter’ she addresses her own child, whose arrival bridges two calendars, different ways of recording time — ‘You arrive in the year of the ram,/ a month after the royal birth.’

In this poem about love, explicitly, Wong also reveals how language separates even a mother and child despite the mother’s yearning to connect. I wonder if these words were the first words she absorbed from her own mother?

The collection is in five sections, not organised strictly by her timeline of travel but by the freer flow of connected memories. Not until the fourth section (headed ‘just an immigrant’) do we meet ‘Arrival’, with the cold facts of Oxford; the simplicity of monosyllables supporting the cautious watchful tone.

There is so much to miss when leaving home, that place of family and growing up. Her college, where the post-room shelves show ‘I was the only Wong there’, had an oddly-judged view of such students.

The placing of these poems is significant. It would have been easier to take a chronological approach but holding them back, putting them deep in the heart of the collection, shows how they are also deep within the poet’s nervous relationship with England. In ‘Confessions of a minority student’ — a poem where the single word, ‘success’ runs in fainter ink down the right-hand margin of the page — her memory keeps returning to early Oxford days and the thoughtless platitudes:

Yet it’s where Wong has to live. Making a home, when she feels like ‘an incomplete being’ and when learning new English words from the exotic sounds of ‘courgettes, crumpets’ in Sainsbury’s isn’t enough, she connects past and present via lunch at Edamame – ‘just like/ the other ramen place in Yaumatei’. The flavours connect her to memories of lunching with her brother, to all the recipes she learned from her mother. She uses food in the way she uses language, to convey difference and identity. In the prose poem ‘A personal history of soups,’ she embraces family and authenticity —

‘Sushi bar amnesiac’, ‘Postpartum vinegar’, ‘Dimsum at Joy King Lau’: food anchors the poems, separates the authentic (Hong Kong remembered) from Chinatown pastiche, and which is impossible to explain to a non-Chinese partner. Taste, shaped in childhood and developed by her mother’s watchful hand in the kitchen, is untranslatable.

‘From Beckenham to Tsim Sha Tsui’ uses train announcements, counterpointing one list of stations in real time (‘Brixton, Herne Hill, West Dulwich’) against her memory of a train route in Hong Kong— ‘Prince Edward, Mongkok, Yaumatei’. These echoes from her past cling and ‘After eight years it’s/ almost home.’ Taking ‘it’s’ as a line break indicates her underlying awkwardness in trying to identify with a single home; accepting that there is no such thing, that home and identity are plural is unsettling and likely to remain so.

Unsettling; it’s a word that kept coming back to me, both in its sense of private discomfort and that of having no single place to settle in. They came together in the final poems, haunted by Hong Kong’s changing political situation and uncertain future; it’s on the news, and inescapable. The fourth section ends with ‘The limitation of maps’, describing a meeting in Oxford with a former colleague, who looks at Oxford with ‘eyes radiant/ as a stargazer’s’. Wong, with her greater experience of multiple homes, writes with delicacy and sadness —

It’s an unexpected ending, the future left hanging and unresolved. Similarly in ‘Truths 2.0’ the fourteen fragmentary sections circle the news and news feeds. Section 7 is a four-line prose poem —

In the penultimate poem, the prose poem ‘Real life thesis’, Wong examines her crowded days — time divided between her daughter, scribbling ‘a line of poetry with eyebrow pencil’, typing up her academic thesis — as though it’s all happening simultaneously. She picks up the idea of dreams again, this time not with the eagerness of a teenager but with a wry reflection: ‘In my dreams there’s hardly any knitting, only a stitching-back of the woman I was, who saw life filled with promise …’

I quoted above from the final poem, ‘A personal history of soups’, in connection with food but read here, at the culmination of so many conflicting threads of identity, its short sentences and earthiness have a comforting depth. Soup, with its mix of ingredients, is a good metaphor for all that life throws into the pot, for the way a recipe is constantly adapted with the different ingredients available. For Wong it’s both ‘here’ and ‘back’ and those ideas are intermingled. Taken as a whole this collection is complex and multi-layered, posing questions to which, ultimately, there are no simple answers.
.