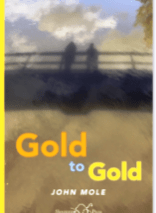 John Mole (born 1941) is a highly respected poet, reviewer and broadcaster. This, the latest of several collections, discusses the craft of writing, childhood in the war and after –

He also considers married love and later, widowerhood. Some of these poems are desperately sad.

In “Pottering” he, like his father before him, potters around a house whose sole inhabitant is him. In “Full Circle” he remembers being a child asking ‘Are we there yet?’, but is now driving alone next to an empty seat. Ancient films like Casablanca and The Third Man remind him of private moments gone for ever.

He is also aware of other people’s tragedies and how the gutter press exploits them. This was very much in people’s minds when a young woman celebrity committed suicide, in February before Covid overwhelmed the news; but unfortunately the subject doesn’t go out of date. Here is “Hacked” in its entirety.

Press coverage may be fleeting but, fortunately, good poetry, unlike bad journalism, lasts. John Mole is a poet worth reading and re-reading.
.