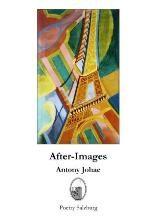 Antony Johae built up this collection of work over time as, captivated by Rohmer’s films, he found himself responding by writing both poetry and prose. In his short introduction to After-Images, he helpfully explains the genesis of the poems and their relationship to individual films. One does not need to know the films, however, to enjoy this collection.

Johae has a deft hand with narrative; he may follow the plot of the films but adds his own ‘take’. The collection, as an ekphrastic response, has its own filmic rhythm, moving between shots and scenes of the characters. The stories of the different characters in both ‘Plum’ and ‘Collector’s Piece’ interweave through the poetry like drama unfolding. Separate titles and indentation mark the sequencing of different scenes in ‘A Light on Louise’. We inhabit fifteen-year-old Pauline’s mind in ‘Pauline’s Complaint’ in such a way that we get caught up fully in the drama on the beach.

Johae also creates dialogue between different forms of writing. In ‘Islands’, he uses prose journal entries to lead into the free verse of ‘Gaspard’s Song’. He enhances the prose with lyrical ship imagery e.g.

This foreshadows the leap into different imaginative territory with a powerful evocation, in the free verse of ‘Gaspard’s Song’, of the dangers of cod fishing. Again, Johae adds lyricism into the narrative when, in the first section of this poem, he draws us into a tempestuous sea scene

Much of ‘Gaspard’s Song’ is powerfully descriptive of the sailors’ tasks and living conditions on board. Johae also adds a haunting homage to Shakespeare’s song ‘Full Fathom Five thy father lies’ in the voice of a wife mourning her drowned sailor-husband.

Another interesting aspect of After-Images is the way in which relationships are portrayed. Clearly the characters are those in the films, but Johae creates a sense of drama and vitality as he sets out dialogue between characters. The final piece ‘The Count and the Marchioness’ effectively alternates between the thoughts of the two protagonists, using italics to differentiate the woman’s thoughts. The prose piece ‘In Pascal’s Place’ plays out the conversations of the narrator with Vidal, Maud, Françoise and Dominic, leading up to the dénouement with its ‘split-second blaze of illumination’.

Some of Rohmer’s films were in black and white, others in colour. The theme of colour arises in several poems. The opening poem ‘Prelude’ has lovely visual images. The first line describes Blanche (meaning ‘white’) in ’a whitened city’; this is contrasted with other settings of ‘a green glade’ and ‘magenta roses’. The poem ‘A Light on Louise’ features grey, white and red, coming back at the end of the poem to ‘the suburb was grey again’. The beauty of a seascape is described in ‘Collectors’ Piece’:

The sonnet ‘Aubade’, dedicated by Johae to his wife Thérèse, follows on from the wedding night scene in the previous poem ‘Epithalamion with Flashbacks’ and adds a personal touch to the collection. Colour stimulates our senses: ‘the day’s dark blue’ and ‘white as marble touched with red’.

This is a technically accomplished collection with varied use of form and rhyme as well as genre which keeps the reader’s interest. Writing an epithalamion was an interesting model to choose and the rhyme scheme is effective with the first and fourth lines in each quatrain rhyming. In the sixth section, this changes in just two stanzas to be the second- and third-line rhyming, marking the intervention of the woman’s voice in disagreement:

‘Industrial Landscape’ has quite a different tone. Johae uses camera and film vocabulary throughout e.g. ‘camera cuts to a canal’ in response to Rohmer’s documentary film about industrial Paris. As in many other poems, Johae varies the form mid-poem, in this case by including a column of short lines to represent high-rise buildings in contrast to the other long-lined stanzas.

In ‘Plums’ there are several examples of mid-poem changes in form. I would highlight the fragmented text in Section 2:

I particularly like the way the cup and saucer are portrayed. Overall, this fragmentation makes me think of a damaged menu card in a café; however I am not totally clear why Johae has chosen to do this here. It does cause us to pause and maybe reflects the slight contretemps with the waiter that ensues.

Finally, the references to place names (Montmartre, Rue Royale, Villeneuve, Le Mans), flower names (Sweet Jessamine, Bellamours), French poets (Ronsard, du Bellay) and artists (Delaunay, Van Gogh, Klee, Kandinsky and Picasso) really add to the richness of the writing and transport the reader to France. The poem ‘Her Promenade’, in particular, takes us around different corners of Paris, ending with mention of Proust’s famous novel à la recherche du temps perdu. In these current difficult times, we could all do with travelling in our imaginations and After-Images certainly offers that possibility. The final words in the prose piece ‘Modern Pastoral’ have a particular resonance at the moment: ‘it is not safe to shut oneself away to be overtaken by loneliness’. We can escape to Rohmer’s world through this collection.
.