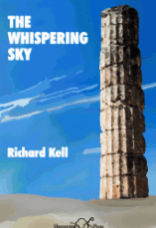 The poetry in this collection resonates with thoughts about the meaning of life and possible dimensions of the afterlife. The poems interrogate the self about its position in this world, the influence of nature on humans and the impact of ageing. Kell is in continuous conversation with his poetry, conveying to the reader a sense of uncertainty because it is not easy to express definite answers to big existential problems. Human nature and the world are often described as delusional, disappointing and violent. Nature, science, God and ancient philosophies, such as Greek myths and Buddhism, do not help the poet’s quest and do not answer his pressing questions: who are we and is there any progression in humans’ journey?

Humanity is inscribed in a cosmos that gives us the illusion of eternity or ‘durability’ but, at the same time, makes us aware of our vulnerability. In this perspective, life ‘isn’t a thing of beauty to be enjoyed,/but a tragedy to deplore’ (‘The Beauty of Life’). Instead life denotes a state in which the poor are exploited, the cruelty of the powerful rules and Nature is indifferent to all sufferings:

The world is portrayed as a Godless one dominated by a void that erases our illusions and takes their place. In Kell’s dialogue with these major themes, there is a constant yearning for something absolute, meaningful and valuable. Unfortunately, the poet cannot find solutions or positive answers because ‘Life is as bad as God’ and ‘we crawl/before a vital power whose ways appal’. Eventually, though, there is a glimpse of hope:

Nevertheless, a sense of disintegration prevails in most poems; they are embedded in a cosmic dimension in which human beings seem lost and unprepared for their own failures and lack of progression. In a similar way, language and poetry do not seem to be able to rescue the poet either with his own writings or with other poets’ works:

For me, the most successful poem of the collection is ‘Letting Go’, in which all the themes dear to the poet, the meaning of life, death, universal dimensions and language, are integrated in clever lines and compelling imageries:

Therefore, the future is uncertain, fortuitous, and we are lost in a wide, apparently boundless, space that is both a void but also a place where hope lingers for a while. In this existential quest, ageing becomes an issue but also an inevitable conclusion of our troubled life. It is our fragility that makes us human but it also makes us angry and wish for death to come ‘as a dear friend’. Old age is described as a trial: life has lost its taste and the body aches. Though the poet seems to be grateful for his past, he suggests people show their love ‘by staying away’, which is a logical conclusion to his impeccable arguments.