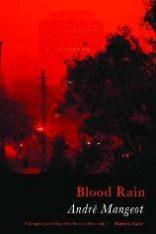 This is André Mangeot’s third poetry collection and his first since 2005, although he has, in the meantime, published two books of short stories and recently completed a novel. The poems are notable for the diversity of their subject matter and, for that reason, it helps that they are divided into four sections.

The first contains poems set in the natural world. The theme that emerges most strongly is that of being alone together, whether it’s a religious flock (“Bellwether”), or a pair of hillwalkers getting themselves lost in the Lake District (“Heart”) or the poet encountering a deer while out running (“Encounter”):

The opening poem, “Oxbow”, begins with an oxbow lake, where Mangeot and his partner used to go (‘that sacred circle where, with bestial hunger // we came to know each other, the sky alone approving’). The lake itself is an image of isolation, cut off when ‘the river turned its back and took another path’. The poem ends with an image of an oxbow in its original sense, ‘life’s yoke, tugging us with unseen pressure // at another’s whim’, which recalls — for me — the end of Muldoon’s “Why Brownlee Left” with the pair of black plough horses, ‘like man and wife’, although here it’s presented less stultifyingly.

The poet recognises that we need both to have our own space and to be connected to others. The questions at the beginning of “Helvellyn” answer themselves:

But “Uhtceare”, a poem I particularly liked, begins:

and ends with the lines

(‘Uhtceare’ is apparently Old English for lying awake before dawn and worrying.) It’s a poem that has perhaps gained a particular resonance in the current pandemic lockdown.

The second section contains poems relating to public disasters: foot and mouth disease, climate change, both world wars, revolution and terrorism. “Lost at Cadiz” is a touching account of saying goodbye, before moving on, to an old sailor he’s been caring for — a veteran, shipwrecked in the Second World War. It captures the man’s speech convincingly. It begins with him talking of a lost vest:

and ends: ‘I close the door, / seeing still your eyes – and all their broken, burning vessels’ — with a neat pun on ‘vessels’.

The poem was slightly marred for me by Mangeot’s habit of using a comma instead of ‘and’, as in ‘I set the pillows, ease you up’, ‘the shipping news / arrives, recedes’, or ‘(new job, new town, the moving on)’. It goes with his weakness for lists — not necessarily a problem in an individual poem, but potentially irritating when the poems are read together, especially with no ‘and’ to round them off at the end. There are examples throughout the book, such as: ‘red campion, / crested dogstail, birdsfoot trefoil, viper’s bugloss’ (“Wild Honey”); ‘she showed us how to seal / each draughty nook, season coals with white sage, lybcorn, / rosemary, chant runes against such glaring portents: // stench of sulphur, burning flesh, the cloven hoof’ (“Foot & Mouth”); and ‘pumpkin, sunflower, grapes, tomatoes; almond, anise, melon, peppers’ (“Escape”). It made me think of Ian McMillan’s complaint: ‘Where’s me ands?’

Another poem in the second section, “Jerusalem”, is a mono-rhymed (or half-rhymed) villanelle, which — through the repetitions of the form and rhyme-scheme — perfectly captures the single-mindedness of a suicide bomber. That and “The Odds”, dealing with people and particulars, worked better for me than “Paradise”, which is more of a straight polemic against religious extremism. And I wasn’t entirely convinced by the title poem, “Blood Rain”, which divines from the deposition of Saharan dust, or whatever it is, on streets and cars an apocalyptic warning about climate change.

The third section, containing memories of the poet’s family and others, is the most personal. There are particularly moving poems about his father, with whom he clearly had a difficult relationship. “Four Dogs” is about the resentment caused by the father’s — apparently deliberate — loss of the family’s favourite dog on a golf-course:

and ends with his father’s confession before he died of the depression it had caused:

Like “Oxbow”, the poem is organised on the basis of themed imagery. The four dogs of the title are actually one dog, two men and a metaphor.

Mangeot’s father himself appears as a Dantean spectre in “Euston Road”, where the image of a possible reconciliation is left deliberately ambiguous:

The poems in the fourth section are more miscellaneous. First come two fables (“The Grievance” and “Escape”) and there follow a number of poems that recapitulate themes in the earlier sections of the book. There are personal reminiscences in “The Sigh” and “Ghost Bike”:

The fragility of the planet is the subject of “Fires” with its Larkinesque ending (‘All we can leave / is love, which nothing can burn’) and “The Egg”:

If there is a theme it is perhaps one of mutability. The section includes a moving elegy (“Grace Notes”) for the actress, Joanna Dunham, who took up painting in later life:

Mangeot impresses both by the variety of his subjects and by his narrative and descriptive range. His willingness to tackle big issues as well as more personal themes marks this out as an ambitious and rewarding book.